Back in December 1989, as the opening of the Channel Tunnel drew nearer, British Rail published a plan entitled “International Rail Services For The UK”. As it turned out this was over optimistic, and did not take account of all the challenges posed by privatisation of rail manufacturing and operations in the UK.

In those early days, British Rail and the Department of Transport believed there was sufficient capacity to handle the expected growth in freight and passenger traffic between the tunnel and London. Also in 1989, a bill was deposited in Parliament to construct a link from the proposed Kings Cross terminus and the West Coast Main Line (WCML). The station at Waterloo was perceived by some; as a temporary measure.

A year earlier, in 1988, as part of the “Sectorisation” programme, BR had created a new ‘Business Sector’ – “European Passenger Services” – to develop those plans for international services. Markets had been identified from existing rail/sea, rail/air, road/air and coach/sea traffic. They even produced a traffic forecast for the first 10 years, from 1993 to 2003, with an expected growth rate of 2% annually after 1999 – things looked positive indeed.

Similarly, another view showed expected regional demand across Britain, as in the map below:

The proposals for through services beyond London were quite detailed, with twice daily services from Manchester and Wolverhampton, combining at Rugby for the run to Paris. A similar service was planned to and from Brussels. On the East Coast Main Line (ECML), a single train from Edinburgh combined with a portion from Leeds was destined for Paris, with another for Brussels. 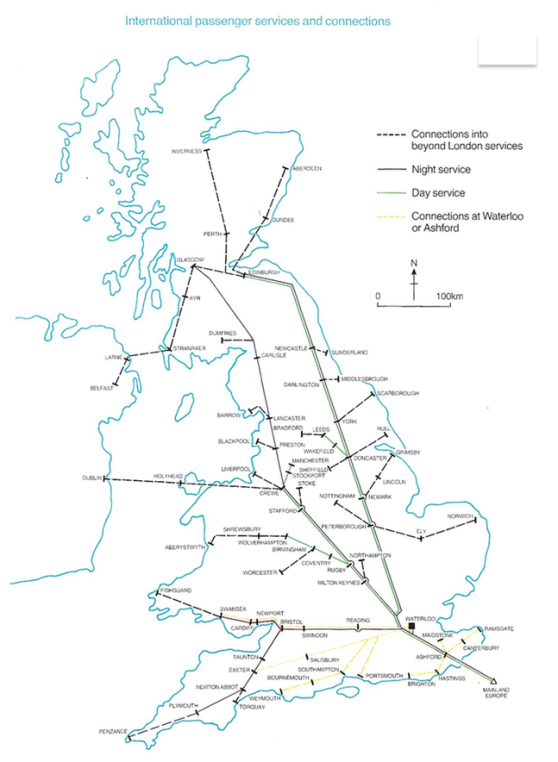 All this of course demanded the shorter length TMST / Eurostar trains that were built, but never used for their original purpose. An expensive, underused investment on Britain’s rail network.

The regional passenger services planned for after the Channel Tunnel was opened became embroiled in the privatisation of BR, and although the UK had a major stake in the trains, its ownership was transferred to a private company. A number of entries in Hansard in 1997 refer to these changes, and in particular on 2nd June, a new Government Minister, Glenda Jackson, who observed:

“The provision of regional day and night services through the Channel Tunnel is a commercial matter for London and Continental Railways, who are contractually obliged to promote a Transport and Works Act Order for a link between the West Coast Main Line and the Channel Tunnel Rail Link. This link would be used by regional services. LCR accordingly lodged an application in January and I hope that Parliament will soon have the opportunity to debate it.”

Equally interesting are the additional remarks made on the same day about the ownership of the Channel Tunnel trains as the new government came into office, Glenda Jackson replying to a question as follows:

“These trains are all owned or leased by Eurostar (UK) Ltd. (EUKL). EUKL, (previously European Passenger Services Ltd.) was transferred to London and Continental Railways (LCR) on 31 May 1996 as an integral part of the Channel Tunnel Rail Link project. An explanatory memorandum on the contracts and agreements between the Government and LCR is in the Library. While European Passenger Services was in Government ownership (9 May 1994 to 31 May 1996), direct grants totalling £423.7 million were made towards running costs and investment.”

So, essentially, the decision to use the trains beyond London was the responsibility of the operators London and Continental Railways.

Ironically perhaps, British Rail had invested £140 million in its infrastructure to allow the regional services to operate on both East and West Coast Main Lines, and even built a depot at Manchester Longsight, for servicing the trains. The Railtrack ‘technical problem’ was really the challenge posed by using a congested North London link line, which would allow Regional Eurostars to access the UK regions, as per BR’s 1989 proposals.

With “sectorisation” BR had created a number of business units – Railfreight Distribution (RfD) was the sector that was projected to play a key international role. In this, the sector was to have overall responsibility for freight workings through the Tunnel, including intermodal and the less than trainload services.

From a market perspective, the UK’s trade with the EEC/EU grew by an average of 6% annually, between 1979 and 1989. The single market arrived in 1992 – colloquially described as the “Big Bang” – and reinforced that high growth rate. It was suggested that freight traffic would triple to 6 million tonnes annually in the early years after 1993. There was a need to identify and provide new designs of freight wagon for these international services, and new intermodal wagons, to be used by RfD and its partners.

During the building of the Channel Tunnel it was clear that the importance of adequate and could not be overstated, since it was still the case that the U.K.’s manufacturing base was still found in the West Midlands and the north. Or, more specifically, as a contemporary report from the Institution of Civil Engineers (ICE) put it, 70% to 75% of goods for export to Europe, are manufactured outside London and the south east of England.

To cope with this and the projected increase, daily freight services would be operated from regional locations, taking an estimated 400 trunk hauls off the road network. Looking back now, this seems to have been a little optimistic, at a time when little or no thought was being given to the environment – in particular, road congestion.

Whilst the lion’s share of rail freight carried through the Channel Tunnel was expected to be manufactured goods and foodstuffs, bulk traffic such as steel and chemicals was also expected to take the tunnel route. Railfreight Distribution was planning to work in partnership with road haulage companies, to ensure integration of intermodal operations, along with the development of “freight villages”.

The view by British Rail of existing market share is interesting too, as it stated that the vast majority of ‘general merchandise’ trade and a great quantity of bulk traffic was carried on Ro-Ro ferries, including both accompanied lorries, and unaccompanied trailers. These lrries and trailers accounted for 70% of the market, whilst existing train ferry services, with rail specific containers accounted for a mere 7% of the total market.

Britain had at this time made little or no use of intermodal, particularly swap body freight vehicles, and with limited integration with road services. It is true to say that plans were being developed by BR and principal wagon builders, such as Procor and Babcock, and the US company Thrall had developed plans for a ‘piggy back’ design, though ‘pocket wagons’ were a problem because of the UK loading gauge. Mainland Europe on the other hand had seen a significant growth in the use of ‘swap body’ and ‘pocket wagons’ for intermodal services.

The proposed ‘freight villages’ would capitalise on intermodal services and road-rail integration, but the low track force, and low ride height technology needed for bogies was still relatively new in Britain. Connecting the villages and other freight terminals to regional ‘operating centres’ was key too, and was proposed to enable combination of trains before onward dispatch to Europe. The map illustrates the proposal for one such terminal at Crewe:

Of course, BR’s plans required investment – to whit, £100 million on new locomotives and wagons. A new fleet of electric locomotives, to supplement the already expanded diesel fleet for UK domestic traffic was also envisaged, but the case for investment here was much tougher.

The wagons too would be very different to the existing Freightliner style vehicles, where the loading deck was much too high – well that said – the deck was to be 88mm lower in the new design developed in France. Smaller wheels was also part of the plan, operating at ‘higher speeds’ (around 75 mph) on international services, and the ‘dedicated fleet’ would be tracked continuously, so customers could interrogate the position of consignments. Obviously that was very important in time sensitive traffic – foodstuffs especially – and it is ironic perhaps that DB Cargo are in 2018 planning to fit their entire fleet with smart sensors and telematics systems.

Maybe the UK can include this in its freight and passenger rolling stock too, and provide a truly ‘digital railway’?

Routes from the Channel Tunnel

Back in 1993, there were no high speed lines in the UK, compared to mainland Europe, and after leaving the tunnel, traffic chugged along towards London, through Kent on the existing routes. It was some 10 years after the tunnel was completed that the first high speed rail link – HS1, or the Channel Tunnel Rail Link (CTRL) was completed. CTRL was always a necessity, identified as a European TENS project and key artery, without it, significant complexity was added to the design, construction and operation of the existing Eurostar trains. 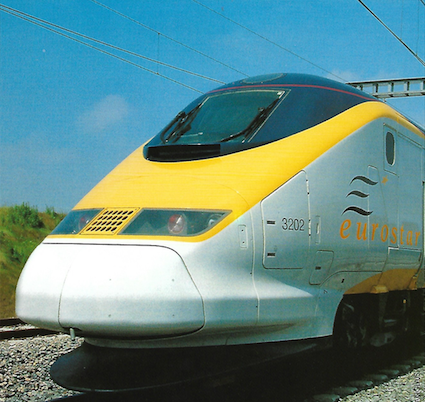 The new line was actually under active planning when BR produced its “International Rail Services” proposals. The 109km route was set to cost £5.2 billion, and built by the consortium, London & Continental Railways. The new route – to be electrified at 25kV AC, included new stations at Stratford, Ebbsfleet and Ashford – in addition to the extended London Waterloo. Kings Cross was still some way off at this point.

For freight, to meet the projected growth, British Rail planned to use Willesden on the West Coast Main Line, as the marshalling point for all though traffic. Whilst the Willesden Marshalling Point was adequate initially, a second, alternative/supplementary location was identified as essential, and required to be operational soon after the tunnel is opened.

Today it’s a bit of a mixed bag, with a European Freight Operating Centre at Wembley in North London, Dollands Moor in Kent, and most marshalling undertaken at Didcot, with the UK’s primary freigtt operator DB Cargo having its operational base at Doncaster. This was one of the locations originally selected as a ‘freight village’.

But looking at the growth of through freight traffic over the 20 years between 1997 and 2016, actually shows a rather depressing profile, when compared to the tonnage carried by individual lorries on the tunnel shuttles. In 2016, just over 1 million tonnes was carried, compared to 2.3 million tonnes on the shuttles. It could be argued that this sorry state of affairs shows the lack of growth in through freight traffic, and BR’s 1989 optimism rapidly gave way to the UK’s obsessive focus on road traffic. The graph below shows the ups – but mainly downs – of through freight services: 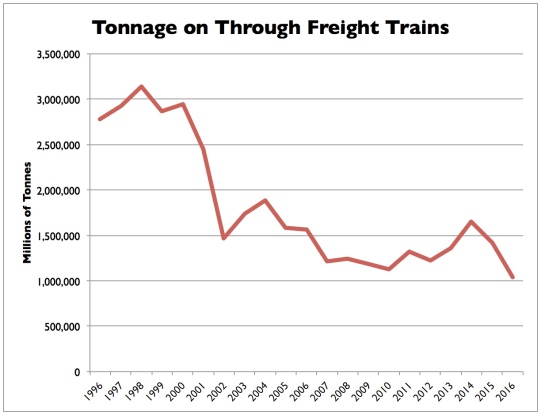 The worst aspect of this is that total traffic through the tunnel has risen by 249% between 1995 and 2016; from 6.4 million tonnes to 22.34 million tonnes, which perhaps might indicate how much wear and tear on the UK’s road network has taken place.

What about passenger traffic? Well, since the decision was taken not to operate any through trains from north of London, only London Waterloo, and more recently, Kings Cross to Paris and Brussels has been the sole passenger route. According to “Getlink”, since passenger services started in 1994, more than 410 million passengers have travelled through the Channel Tunnel. Just looking at some recent statistics, between 2008 and 2015, over 98 million passengers have travelled by Eurostar. 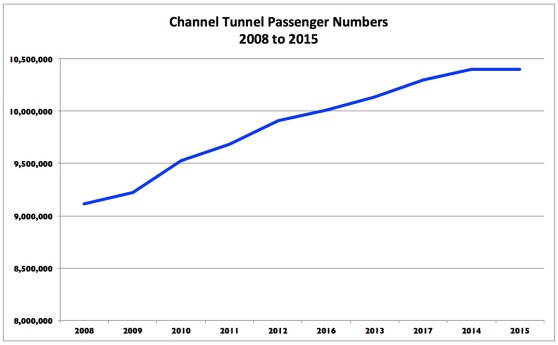 Today, with all of the plans so optimistically announced by British Rail in 1989, and with the expansion in passenger and freight traffic, do we operate fewer trains on an international level than before? Have we achieved or maximised the potential that the Channel Tunnel offered – the answer sadly, is perhaps not. There is still some way to go, and there are still no plans to operate regional international services.

In fact, the trains that were intended to provide those services in the 1990s, are being scrapped and broken up in 2018. Perhaps changes may come after HS2 – but that is still another decade away – over 30 years since the original, ambitious proposals.