Back in the 1950s and 1960s, one of the railway industries trade directories – “Directory of Railway Officials & Year Book 1958 – 1959” – carried over 200 pages of adverts from suppliers to Britain’s railways. Today we are down to a single major works and a UK supply chain that is tiny by comparison.

But there is hope too. Hitachi have opened a new manufacturing facility at Newton Aycliffe, in County Durham

So where have they all gone? What has happened to the once familiar names in the engineering and manufacturing industries that provided these essential supplies? Just a simple breakdown of the companies shows some fascinating variations in where the work was carried out, and where the supplies and skills were located. 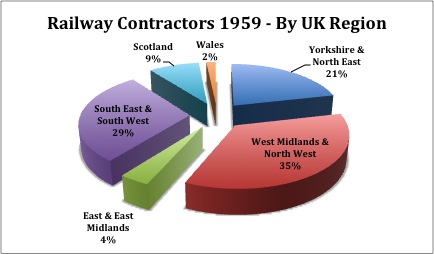 It is blindingly obvious to state that the majority of manufacturing took place in the midlands and the north of England. Ironically perhaps, not too far from where it all started almost 200 years ago in the 1820s.

Intriguingly though, the South East accounted for 27% of the supply chain, from 49 separate businesses – mostly, but not exclusively as light manufacturers of fixtures and fittings, such as carriage door latches, or agents and importers of materials.

The pages of the 1958-59 Directory of Railway Officials and Year Book is littered with the names of the many once familiar businesses in the UK engineering industry. Take for example, “Parkinson & Son” of Shipley, “Kendal & Gent”, and the “Churchill Machine Tool Co.” of Manchester, or “Butler’s” of Halifax. These companies provided large and small – small being about the size of a supermarket delivery van!! – machine tools. These included milling, slotting and planing machines, together with centre, capstan and turret lathes. All of which saw duty in either motive power depots, engine, carriage and wagon works, or those workshops of the engine builders and suppliers to British Railways. Not only that, but, of course, they were exporting to “the colonies” as well, to supply railways in areas of the globe that were still outlined in red, and beyond that too other foreign countries.

The names of some of these suppliers held sway in the memory for many years, names such as “Beclawat”, or “Widney”, who’s carriage windows were made in North London or Birmingham. Outside the carriages, and underneath, you could easily come across the “Dowty” hydraulic units – buffers and other kit – where the name was embossed on the casing. Similarly, you would see the name “Woodhead” or “Armstrong” on springs and shock absorbers.

The factories and workshops that turned out these components, fittings and machinery were widely distributed around te UK, from Sheffield to Shipley, and Manchester to Birmingham, Leeds, Renfrew, Paisley, Beverley, Gloucester and Altrincham..

Everywhere, home grown engineering, fabrication, production management, design, research and innovation was a vital, and fundamental part of the supply chain. Beyond the 200 or so companies able to advertise their products, there were still more suppliers providing services and materials to the offices, stations and workshop facilities of these businesses.

On stations, where would the postal services be without the likes of Lansing Bagnall, providing not just fork lift trucks, but luggage trolleys and sack trucks. There were refreshment rooms, large and small, across the country, the news stands of WH Smiths, Menzies, weighing scales, platform ticket and chocolate, milk and soft drink dispensing machines everywhere. These are all still there today, but in the main they are restricted to larger stations in towns and cities, all operated by sub-contractors – not quite like the roadside ‘burger bar’ – more like motorway snack bars.

Of course, the major locomotive manufacturers such as English Electric, Metrtopolitan-Vickers, BTH, etc., along with the railway workshops and depots all needed the services of a considerable number of suppliers.

Today, many aspects of the rail industry supply chain have changed dramatically. Unsurprisingly this has been driven by the massive decline in the rail manufacturing business. In the next part of this occasional series, we will look at what we do 50 years later, and where it is done.