The legend and romance of railroading and steam power has perhaps never been expressed as eloquently as it was in the USA. The legends are as familiar to British railway enthusiasts, as they are in their home country, with companies like the Pennsylvania Railroad, Baltimore & Ohio, Southern Pacific, Santa Fe, Union Pacific, and New York Central, to list but a handful of the Class 1 railroads. In the 1940s and 1950s many of the giant locomotives of North American railroads were replaced by diesel locomotives, but their image and memory lingers.

The overall design of US steam power has been criticised on this side of the Atlantic for its lack of aesthetic appeal, with exposed working parts, and a myriad of pipes clinging to every conceivable part of the steam engine’s anatomy. But, even in this country, where it was deemed that not a trace of pipework should be visible above the footplate, or running boards, American designs had their friends. In later years, too, the influence of American design – from the viewpoint of pure practicality and efficiency – was seen on British railways. American locomotives took full advantage of the generously- proportioned US loading gauge, employing massive rigid-frame and articulated locomotives.

J3a No. 5429 running with the brand new “Empire State Express” (the name survived well into Amtrak Days), in December 1941, with a different style of streamlining to the earlier ‘art deco’ form from the design stable of Henry Dreyfuss.  (Photo courtesy of the NYCSHS Collection)

On the eastern seaboard, the New York Central served some of the most prestigious cities in the eastern states, including its namesake, and with some of the most famous named express passenger trains. Amongst those famous named trains were the “Empire State Express”, “20th Century Limited”, and “Lake Shore Limited”. Running alongside the Hudson River, the New York Central’s expresses ran northwards to Albany, and west to Buffalo, and then along the shore of Lake Erie, passing Niagara, and on through Cleveland to Chicago – a distance of 958.5 miles.

This railroad boasted a design of locomotive, too, whose fame is ranked alongside the legendary Gresley A4 Pacifics of the LNER. The engines in question were the ‘J’ series of 4-6-4s, the Hudsons, whose design, construction, and appearance was eye-catching to say the least – especially the streamlined versions, With their bullet-shaped casings, or the odd- looking (to English eyes, perhaps) “Commodore Vanderbilt’, with its wedge shaped nose, and deep side valances. The New York Central was at one time a ‘Vanderbilt’ road, and from the 1860s, additional lines such as the Michigan Central and Lake Shore & Michigan Southern were absorbed. At that time, many US railroads sported considerable ornamentation and not a few gaudy colours, which Mr. Vanderbilt took exception to and consequently NYC motive power was barred from appearing in any colour other than black.

That said, it was not always a ‘Vanderbilt Road’ and in the 1920s and 1930s, the Hudsons sported a more colourful, streamlined style.  Interestingly, the first of the streamlined 4-6-4s, J1e No 5344, was an experiment, with the later series of ten Class J3’s, Nos 5445-5454, sporting the much lighter ‘Dreyfus’ style. The J1e No 5344 was actually the first streamlined locomotive in the USA; although built in 1931, it did not receive the casing – which was especially designed by the Case School of Science in Cleveland, Ohio until 1934. 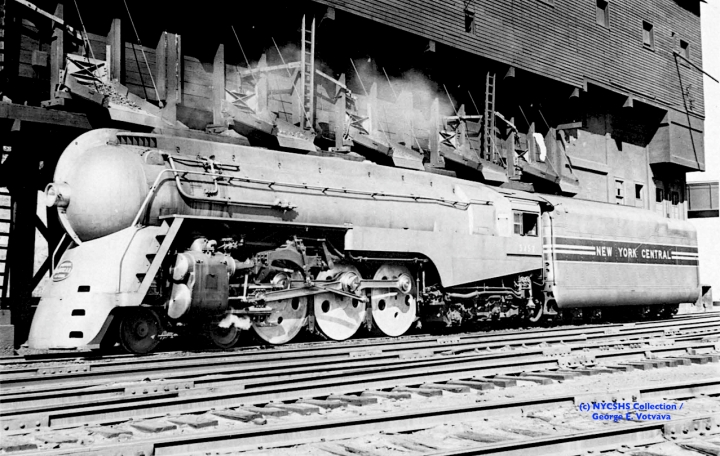 No less than 275 of these Hudson 4-6-4s were built, between 1927 and 1938, and they were only displaced from the premier services by the larger and more powerful Niagara class 4-8-4s. They began life in the mid-1920s when, in 1926, the NYCRR’s chief engineer experimented with the fitting of a four- wheeled trailing truck to one of the company’s K-3q Pacifies. T o be precise, it was No3284, and it ran in this form for almost a year. However, the prototype 4-6-4, No5200 was completed at the Schenectady Works of Alco (the American Locomotive Company) in February 1927, and delivered with due ceremony on Valentine’s Day that year. The next decade was occupied with the building of the remaining 274 locomotives, in a variety of forms, some with spoked wheels, others with th e cast steel Boxpok type, and others with Scullin disc wheels, and numerous other, detailed variations. Overall, however, the design was a tremendous success, hauling the heaviest loads of over 1,000 tons on the long haul to Chicago,

FIRST OF THE LINE

The prototype 4-6-4 No 5200 was the first tender engine with this wheel arrangement in the USA, but its arrival from Alco’s works was rapidly followed by similar locomotives for the Nickel Plate Road. Baldwin also had 4-6-4s under construction for US railroads, including ten for the Santa Fe.  No 5200 exhibited many of the characteristics of a prototype, with Walschaerts valve gear (the majority had Baker valve gear) and a small eight-wheeled tender.

Like their counterparts in Britain and Europe, the railroads of the US had their streamline era, and the NYC’s Hudsons sported a form of streamlining on the last ten locomotives built by Alco in 1938. The first series of J1s, up to J1e showed relatively minor differences in detail design, with all of the class having cast steel frames, integral cylinders and smokebox saddle.

The boilers of the J1 series were all pressed to work at 225lb/psi, whilst the smaller wheeled J2 series saw this increase to 2401b/psi and in the J3a series it was originally set at 275lb/psi. The J1s had riveted boilers, and at high pressures this led to problems with boiler seams so to reduce the risks associated with the more complex boiler design, no J1 boiler was equipped with a combustion chamber.

From their introduction, the J1 s were working trains of more than 750 tons, with full throttle, and 65 per cent cut- off, and over long distances at more than 65mph. On one train, the ”Wolverine”, a J1 hauling 21 heavyweight passenger cars, and weighing in at more than 1,600 tons, hauled the service from Windsor (Ontario) to Harmon (New York), a distance of 639 miles! More than that, on one section of seventy-one miles, the train – with one locomotive – averaged no less than 62.5mph. An impressive performance, indeed, yet one that was repeated clay-in, day-out, week- in, week-out, for many years. The power of the Hudsons on test was recorded at more than 3,000dbhp, and on one run, the prototype No5200 actually recorded 3,490dbhp at 57.5 mph – and this was before improvements! The K-5 Pacifies which they had replaced on NYC’s heavy hauls were recording maximum drawbar horsepower figures of only 2,530, and the J1 Hudsons were seen to run fifty per cent more mileage with heavier loads than their predecessors. In cost terms – both coal, water, maintenance and repairs – the new locomotives were more economical in terms of engine changes, and the extra power generated was later used to provide more passenger amenities, such as sir-conditioning, better lighting, and other auxiliaries.

The New York Central was responding to greater passenger loadings on its routes in the 1920s and 1930s, in common with other railroads, but it was reluctant to adopt eight coupled wheels, and the ultimate development of the J series was the J3a. The increase in power needed for the heaviest NYC trains was driven from studies carried out in the mid-1930’s, and a series chests in 1937 with J1 4-6-4 No 5339 and K-5b Pacific No 8363, and the result was the NYC’s six-coupled swansong, the J3a series. The new locomotive’s boiler included combustion chambers, all-welded firebox, and amongst other changes, the boiler showed a ten per cent increase in evaporation rate compared with the earlier locomotives, from a boiler With a working pressure now up to no less than 275l b/psi. The detail changes that had begun to appear on successive developments of the JI series – nickel steel boilers, wider use of aluminium for non-load bearing parts, comprehensive adoption of roller bearings, and so forth, were embodied in the final batches of fifty J3ats. In performance, too, the J3as showed that they had what was needed ro haul the ever-increasing loads over the ‘Water Level Route’ and, initially, on tests, developed more than 3,800hp. After re-draughting, chis was pushed up to a maximum indicated horsepower figure of no less than 4,725!

The J series.as whole were the most numerous 4-6-4 passenger engines of this type, and carried out their duties with ease, although there were the occasional mishaps, including two boiler explosions. The most common problems with the Hudsons, though, seemed to centre on the power reverse, one which was never fully resolved before dieselisation left every steam development trailing in its wake.

In general service the class recorded mileages of as much as 200,000 miles between general repairs, made possible by ythe use of much that would be termed ‘new technology’, and which also supported the class’s ability to run hard and fast with immense loads. Another interesting operational statistic was the firing rate, which by British standards was phenomenal, and with the J3s, this could reach 1731b of coal per square foot of grate area every hour, at maximum evaporation rates. Obviously hand-firing was not contemplated. 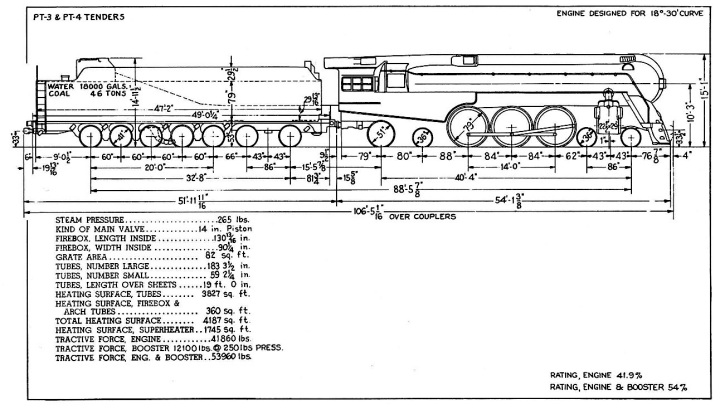 Going through the 1940s. and into the early 1950s, the Hudsons were still at work on long, heavy express workings, and the lengths of some of these workings increased over the years. It was not commonplace for the class to work through to Chicago from New York, but regular runs over 500 miles were the order of the day, with loads in excess of 1,000 tons. It is impossible to do justice to these magnificent steam locomotives in a few words, but they do represent some of the finest examples of American steam power, and are as much the stuff of legend as Sir Nigel Gresley’s A4 Pacifies. However, what Gresley’s A4s did occasionally, the New York Central’s Hudsons were required to do daily, and more besides. Sadly, they were consigned to the scrapyards between 1953 and 1956, displaced by the Niagaras, and General Motors diesels, but not before they had earned their thoroughly deserved place in history.