The steam locomotive footplate may, by and large, be seen as amongst the poorer working environments to many people, with the designs differing between the various railways, from the spartan confines of the GWR variety, to the more commodious BR Standard version. Back in the early years of the 20th Century, footplate men were fighting hard to improve both their working conditions and hours of service, including safety and rates of pay.

Leafing through a copy of the Rates of Pay and Conditions of Service for BR Staff, for the 1950s recently (dated 1958), it was surprising to see how little things had changed since 1919.

Taking as an example, engine preparation and disposal times, much of the 1958 detail dated from 1919 – 1924.   Additions were made in 1933, covering the operation of diesel shunters that began to arrive in the 1930s, together with Sentinel steam locos and petrol rail cars in 1940, and a solitary British Transport Commission Inclusion referring to diesel multiple units in 1954. Also included under the “Electric Trainmen Agreement” of 1921 covering the booking on and off, and preparation for “Motormen” and “Assistant Motormen”.

In almost all examples, whether steam, diesel or electric, locomotives or trains were prepared or disposed at depots by shed staff, but if another crew relieved staff, the more obvious actions such as returning tools to stores were done by the crew taking over the train.

In steam days there was what were known as “marginal times” for preparation. These were based on the heating surface of each type. For a Iocomotive with a heating surface of more than 1,500 sq. ft., 60 minutes was allowed, with 45 minutes for all other types. These allowances of did not include coaling, which It was recommended, should be carried out before the loco was put on shed. Again, these times although in force In 1958, had been set down some 39 years earlier, in August 1919.

Booking on and off duty

Booking on and off duty was required to be carried out at the shed, except where special local arrangements had been agreed, and shed staff would normally prepare and dispose of engines for the crew coming on duty.  Blindingly obvious perhaps in the case of steam locomotives!

The crew was allowed 15 minutes to read notices, “take charge” of the engine and take, it to the shed signal.  This was unchanged from 1919 – almost 40 years earlier – and this was still included in 1958:

This phrase related to the “Guaranteed Day”, and in 1982 was the subject of the bitter dispute between BR and ASLE&F in 1982, and a strike over the introduction of “flexible rostering”.

Another curious phrase referred to the booking on and off duty allowances would have to be dealt with on a “give and take” basis. Also included in the 1958 conditions, but omitted by 1982, where details of preparation and disposal seemed much more complicated – at least there were no references to steam traction.

So far as the crew was concerned, bringing the engine onto the shed, depot staff carried out the remaining disposal work. The driver was responsible for seeing that such matters as booking down repairs in a repairs book and warning shed staff that a particular item or items, or a fault was in need of attention/rectification

The time allowance of 15 minutes, given to the Driver and Fireman, included:

It the crew was not required to lock up tools or carry lamps to the stores, and when they were relieved away from shed, in both instances the Driver’s allowance was reduced to ten minutes. It seems the poor old fireman lost out on allowances on these occasions.

These disposal allowances all dated from 1923 and 1924, and still in existence in 1958, but by 1982 that level of detail to calculate “walking time” had been replaced by phrases such as “…appropriate walking and/or travelling time between the booking-on and relief points to be agreed locally.”

For Sentinel steam locomotives, diesel shunting locos., and petrol railcars or shunting engines, no fixed allowances were given, but any allowances for preparation and disposal were to be agreed at the local depot. These amendments dated from 1933 and 1940, but by 1958, the diesel multiple units operated by BR included specific allowances.

In 1954, a 15-minute allowance for booking on and off duty, taking charge, reading notices and booking any defects was included, along with reading of notices, etc. No mention was made of taking the unit to the shed signal. Having maid that, then of course In later years (i.e; the 1960s), not only wore multiple units treated differently to locos but the new diesel and electric locomotives gradually acquired quite separate depots and stabling points from the steam running sheds.

Other Conditions of Service

All the foregoing notes refer briefly to the engine preparation and disposal tests only as they existed during steam days on BR; there are many other regulations and conditions of service that relate to footplate staff. Some that particularly reflect the working environment include Link Working, Eyesight and Physical Examinations, Technical Examination, Hours of Duty, Rostering, Mileage, etc. And then there are the rates of pay. 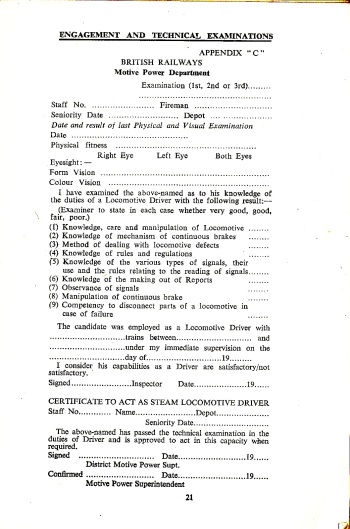 Under Part 4 of the Railways Act 1921 the four main line railway companies wore obliged to set up not more than five Sectional Councils, whose purpose was to deal with issues affecting the working condition of railway employees. Those were of course carried on into BR days, and Sectional Council No. 2 covered that group of staff concerned with the footplate, and included no fewer than 38 separate grades ranging from Drivers, and Firemen to Steam Raiser, Tube Cleaner, and Cleaner and Oiler (other than Labourer). But that, as they say, is another story.

Has it changed today? Well it certainly changed after 1982, but I wonder how the same technical, physical and mental demands have altered, and how technology has either reduced, or increased ‘footplate’ complexity.