he first 30 of the Class 56 diesel- electric Co-Co heavy freight locomotives supplied to British Rail by Brush Electrical  Machines Ltd were built by the Romania subcontractor “Electroputere”, and entered service 40 years ago. These were classed as a “Type 5” and fitted with a Ruston-Paxman 3,250 bhp (2,423 kW) 16RK3CT diesel engine, with a Co-Co wheel arrangement. The diesel engine was the final development of the old English Electric CSVT series, under the GEC Diesels badge, which brought together both English Electric and Ruston-Paxman at Newton-le-Willows.

The electrical and control equipment in the Class 56 is a really interesting and innovative development, with a Brush three-phase, twelve-pole main alternator to provide power to the traction motors, and an auxiliary supplying the cab air-conditioning equipment, blower and compressor motors and battery charger. Both alternators are brushless, each with a rotating diode assembly to rectify the ac supply from the exciters for excitation of the alternators. This separately excited, or –‘sep-ex’ – technique was the next logical step to the full AC drive systems in place today. 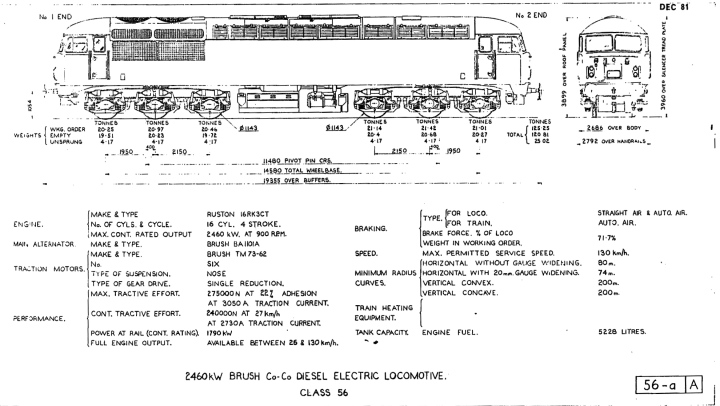 Mechanically they were very much the same as the earlier Brush Type 4 (Class 47) design, with an all- welded monocoque superstructure assembly using a stressed skin form of construction. 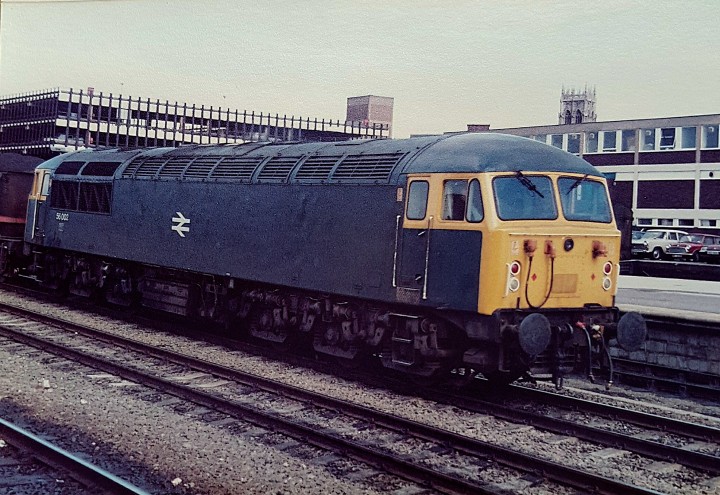 Unsurprisingly perhaps they bore a strong similarity to the Brush Class 47 /Type 4, as the photos and diagrams show, and are the last of what might be described as the British Railways style of double ended locomotives, with a full width body. They were later joined by BR’s final diesel design, the Class 58, and although this also featured a cab at each end, it followed a perhaps more traditional freight loco design, with only a simple casing/hood over the engine. 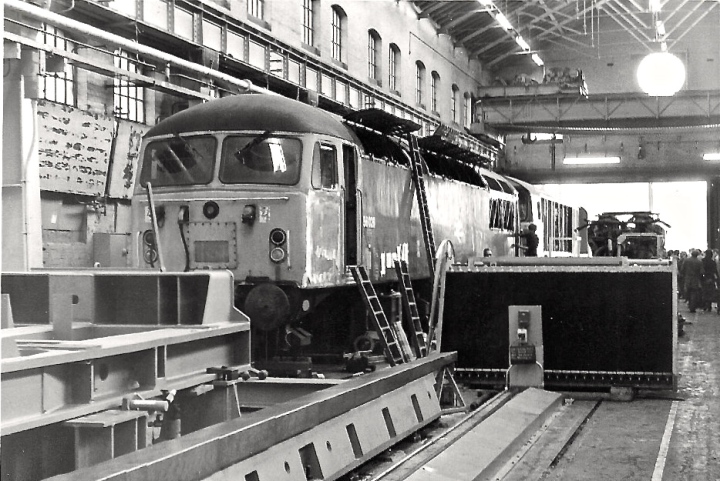 The Doncaster built Class 56 were the penultimate diesel design built in a BR / British Rail Engineering Ltd works for British Rail, with the works building BR’s final home designed and built locomotive, the Class 58. The first 30 locomotives Nos. 56 001 – 56 030) were found to be a poor quality build, with many being withdrawn from service early for extensive rebuilding, and then re-entering re-entering service.

The first Class 56 3,250hp Co-Co diesel-electric heavy freight locomotive to be built by BREL was handed over to British Rail on 29th April 1977, shipped from Romania through the port of Harwich. It was planned to outshop 20 locomotives per year.

Since BR had indicated there would be a follow-on order after the first 30, Doncaster Works resources would be severely stretched to meet these targets. Despite the fabrication facilities available at Doncaster, it was the lack of numbers of skilled staff to build the mechanical parts that was the most difficult challenge.

For this reason, the use of Ashford, Eastleigh and Swindon Works to fabricate sub-assemblies proved essential to meet the building programme timetable. Roofs, fuel tanks and cab frames were produced at Ashford, with cab desks from Eastleigh, and radiator housings from Swindon.

At that time – the mid to late 1970s, the big railway workshops were still in existence, although there had of course been many closures, loss of skilled staff, and re-organisations that were to come would prove even more costly to railway engineering in the UK as a whole.

The final batch of 30 were built at Crewe Works, and with the BREL works across the UK coming together to supply the sub-assemblies, skills, knowledge, experience and programme timings were maintained. Brush and their subcontractors supplied the type CP2 bogies, whilst the power and control systems were designed and provided by the Loughborough company.

In operation they were hit by the BR privatisation, and became part of the newly formed EWS (English, Welsh & Scottish railway Ltd) from 1996, which comprised four divisions of British Rail’s rail freight operations – Rail Express Systems, Loadhaul, Transrail Freight and Mainline Freight. EWS later bought the National Power Rail Unit and British Rail’s European division – Railfreight Distribution, using the Class 56 in their primary role, until the arrival of many of the new Class 66 locomotives. By 2004, the Class 66 were in the majority operationally, and EWS took the decision to withdraw these Brush designs, although some were used in France to help build the then new LGV for TGV-Est, and other European work. 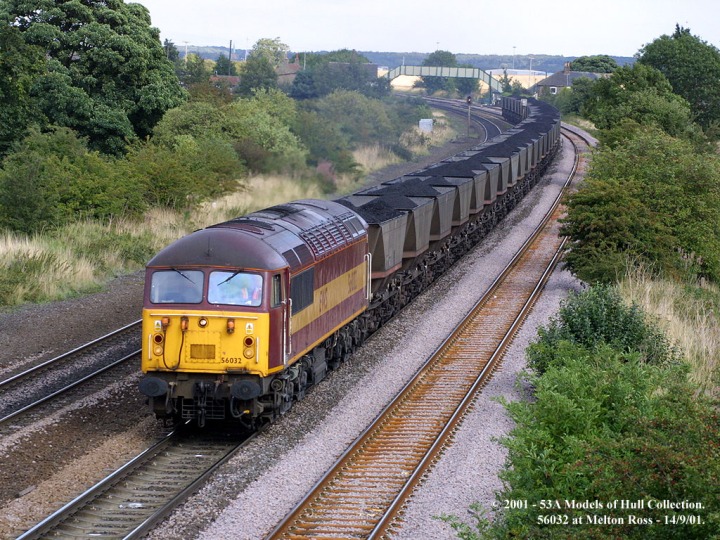 Classic shot of the second of the second Doncaster built engines, 56032 on a typical MGR working in EWS livery in 2001
© 53A Models of Hull Collection

After EWS withdrew the Class 56 in 2004, they were stored at Crewe, Toton, Warrington, Barrow Hill and Eastleigh, and when DB Schenker bought EWS they continued to focus on the Class 66 as their preferred main line freight type.

DB Schenker, now DB Cargo sold 27 Class 56s for scrap to European Metal Recycling in 2011, but 11 were bought by Colas Rail, and remain in service on traffic for which they were originally built. Colas is effectively a subsidiary of French engineering company SECO. UK Rail Leasing own and operate a further 15 class 56 locos, which operate on a range of services.

The Class 56 proved operationally superior when compared with the later Class 58, and a number have been preserved, whilst others are still in service with other train operating companies, including:

Whichever way you look at the Class 56, it has been both successful and unsuccessful, as BR’s last Type 5 locomotive, and in effect brought back to life after privatisation, effectively saying that BR had done a good job in the design and operation of this locomotive.

Many are still with us 40 years on, through occasional lease to rail freight operators, but the design does bring to an end that era of British diesel locomotive building, and the legacy from Brush Traction/Brush Electrical Engineering.