In Ireland, the new CIE Class 22000 now features a hybrid drive, from a Rolls Royce-MTU diesel engine and Li-ion battery pack.   The principle is not new, and the Class 22000 have been around for the best part of a decade, but this latest development further enhances the railway’s green credentials.

CIE have a 10-year strategy for investment in ever more sustainable rail transport, and back in October 2019, the Government approved an order worth €150 million for 41 new “22000 Class” railcars/multiple units, on top of the current 234 car fleet. The new rolling stock will enter service in late 2021 in the Greater Dublin area, and according to CIE, will provide a 34% increase in capacity on peak commuter services.

The 22000 Class vehicles began operations in 2007, and were paired with the MTU diesel engine and Voith transmission, and were intended primarily for the Dublin – Belfast services. Between 2008 and 2011, their range of operations was extended; more vehicles were purchased, and operated as 3-car, 4-car and 5-car sets.

This latest order for the hybrid variety is actually part of a longer term plan to operate up to 600 battery-electric hybrid carriages on the network by around 2029. These railcars have been operating for around 12 years now, although not without some operational issues.

As ever with railways in the 21st century, buying new trains, or even power trains, is an increasingly complex process. The latest order was placed in concert with Porterbrook Leasing, who also bought the new MTU-Rolls Royce hybrid power pack, which was unveiled at Innotrans in Berlin some 4 years ago. 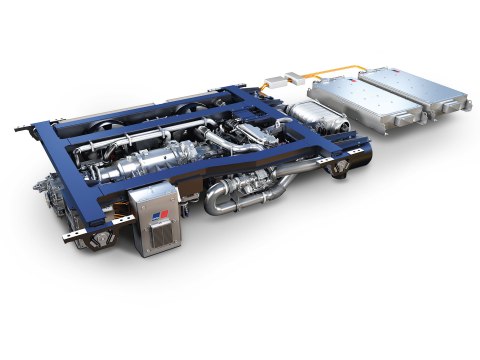 For CIE, the hybrid power pack marks the start of much greener rail operations, and follows the path that many other national railways have started on, and whilst initially the new trains will primarily used the MTU diesel engine, too is one of the most environmentally friendly in its class. The option to link to the batteries, which are recharged during braking, will soon be the commonplace driving mode – initial starts on electric motors, then following on with the diesel that complies with EU Stage V emissions, and as the train slows, the charge used by the batteries is replenished.

But this video is a great explanation of the concept and operation.

This is a rough translation of the text with this video:

“With its Hybrid PowerPack®, MTU has been nominated for the 2018/19 innovation award by Privatbahn magazine in the Energy & Environment category. The award ceremony will take place on April 2, 2019 as part of the Hannover Messe.

The MTU Hybrid PowerPack® was developed further from the previous MTU underfloor drives. The hybrid concept consists of a modular system with various drive elements. The power-tight electrical machine is individually scalable and extremely compact. Depending on requirements, the MTU EnergyPack (scalable energy storage) can be positioned in the roof or under floor area of the railcar. This enables flexibility to procure new vehicles or to convert existing vehicles.”

MTU-Rolls Royce and CIE announced the arrival of the new Class 22000 trains with this press release: