Well, not strictly suburban, but the second major electrification on New Zealand’s railway lines that involved English Electric; this time on the main line linking the capital, Wellington, with Auckland, 400 miles away to the north. This was the first stage in electrifying the North Island Main Trunk (NIMT), across some of the world’s most spectacular, and challenging terrain.

English Electric were pioneers of electric traction, and were especially successful around the world, notably of course in former British colonies, whether India, Australia, and of course, New Zealand.  In the 1930s, increasing traffic around Wellington, and the success of the Arthur’s Pass project almost a decade earlier, the North Island electrification work led to an order for tnew main line electric locomotives.  These were the first heavyweight (my italics) locos in service on the route from Wellington to Paekakariki, which later became the North Island Main Trunk (NIMT).

The locomotives introduced a number of new, novel features, even by the emerging ‘new technology’ of the day, and yet oddly, their wheel arrangement was initially described as that of a steam loco – i.e. a 2-8-4 – but later a 1-Do-2.  It’s hard to know which sounds more compex.

The locos had a long life, and although only two survived to be preserved as static exhibits, they marked at least the start of electric traction progress in New Zealand.  The Preston company received further orders from ‘down under’ after the Second World War too, with a Bo-Bo-Bo design in the 1950s, as the “Ew” class, and as late as the 1980s English Electric – as GEC Traction – were still supplying electrical equipment.

Hopefully the overview of this design will whet your appetite further. 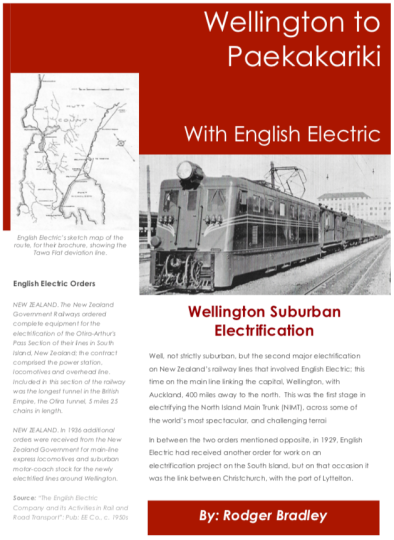 The earlier project is described here: “Over The Southern Alps via Arthur’s Pass”