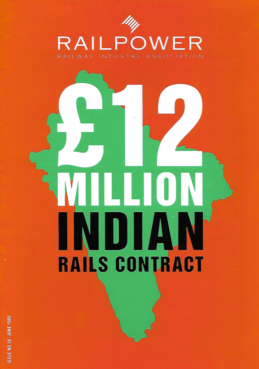 Exactly 30 years ago, British Steel Corporation received a £12 million order from India, to supply Grade A wear- resistant rails for the modernisation of a number of high-density urban and high speed inter-urban routes.  The rails would account for around 20% of BSC’s Workington Rolling Mill’s output in a year.  The contract was won against international competition, particularly from companies in Western Europe, Japan and Canada.  In 1989 Workington was one of the world’s leading producers of high quality, wear-resistant rail products.

As part of the United Steel Companies of Sheffield – and later British Steel – Workington ceased making new steel, but operated primarily as a rolling mill, taking in steel ingots from other United Steel sites, and rolling into various sections.

From 1974, the Moss Bay site began to specialise in permanent way products – such as rails and fish-plates. Continued investment, together with their acquired know-how, ensured that they became the largest British producer of these products.  Whilst further south, in Barrow-in-Furness, the plant that had been the world’s pioneering supplier of steel railway rails, by volume, the works concentrated on even more innovative steelmaking ideas.

In fact, the Workington plant had taken over rail production after the end of World War II, from nearby Barrow-in-Furness, where the world’s largest integrated steel and iron works once stood.  Barrow was the major supplier of railway rails to the world, and only lost that position following the post war economic challenges, and steel industry restructuring in the UK.  Workington took on the mantle and remained one of the world’s leading suppliers until its final closure only 13 or so years ago.

Like Barrow, Workington was an innovator in steelmaking technology, and despite the dramatic decline of the industry in the 1980s, was deploying technological innovation, with new techniques and processes until its final demise. In British Steel days, the business had been successful in the world market for wear-resistant high-grade steels, and consolidated this lead with a £7 million investment programme at Workington in 1987, just a couple of years before landing the Indian order.

The modernization at Workington included the world’s first mill-hardened rail production unit at a cost of nearly £4 million, alongside this another £1 million was invested in the second stage of a computerised automated inspection system, to provide ever closer control of dimensional tolerances on finished rail products. 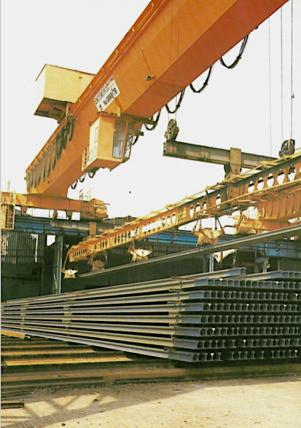 In addition, in 1987, Track Products won a multi-million pound, three-year contract to meet all British Rail’s requirements for rails until 1990. Under the contract, Workington was committed to supplying some 150,000 tonnes of rail to BR.  At the time this was stated to be about ¼ of the capacity of the Workington plant, and with British Rail as the site’s biggest single customer. The collaboration in research effort between British Rail and BSC Track Products on developing rail steel technology maintained the northwest’s reputation for innovation, and was an important factor in generating export sales, from Southend to Singapore.

Workington’s rolling mills had been producing some 1/4 million tonnes of rail, fishplates, baseplates and steel sleepers annually during the mid to late 1980s, and from that total, Workington was actually exporting 50 to 60% of total output.  The West Cumbria (Cumberland) site produced rails from feedstock of 330 x 254mm cross section blooms supplied from other BSC Works, mostly the Lackenby Works on Teeside.  Barrow had also supplied Workington with steel until it took on, developed, and perfected the now commonplace continuous casting process. 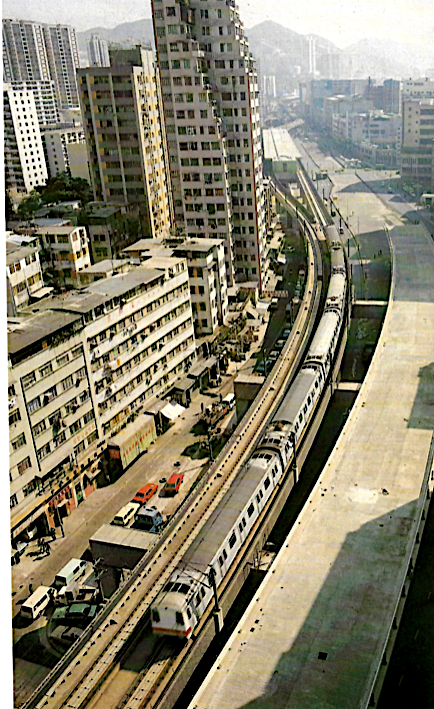 Workington supplied rails for the Hong Kong and numerous other metro systems.

The role of the BSC Track Products mill in the overall manufacturing process was just that – the supplier – and (at least in the 1980s) British Steel had little part in the design, and virtually none at all with the installation.  The greater part of the output was for replacement and/or maintenance purposes, they had been supplying small quantities of the specialist ‘conductor rails’ at home and for some overseas metro systems.

Other exports to – for example – African countries were rare, and even countries such as Nigeria, with sufficient wealth to promote rail expansion proved to be slow to implement projects, leaving British Steel Track Products in a difficult position.  So, the order from India in 1989 was certainly a great, if brief success for the UK steel industry as a whole.

Today, there is nothing left of the steelworks or rolling mills in England’s North West, where it had once led the world, in both the quality and quantity of global rail exports.