I have travelled on the West Coast Main Line in Britain for many years, from the days of steam, to the days of the Pendolino, and it seems to me all that the general public are fed is a diet of stories about the curly sandwich. This seemed especially true of the nationalised network.

The last time I made a journey by a main line service, all that seemed to be on offer was a vending machine, several varieties of crisp, bread rolls, burgers and a coffee from an automated dispensing device. Fast food seems to have taken a stranglehold on train travel in the 21st Century.

Well clearly that’s not much better than the impression that the nationalised system was offering nothing more than a dried up sandwich, and watery tea – or coffee.

Back in the later British Rail years, where InterCity was making a profit, the food offering could be quite impressive too. In fact, under BR’s Sectorisation – InterCity was set up in 1987, and made an operating profit of £57 million in its first year, £56 million in 1989, and £49 million in 1990. That despite a cut by the Government of 29% in the passenger grant for rail operations. (Yes, I know it covered other BR sectors, but it would have been impacted.)

In the Spring of 1993, under the custodianship of Chris Green, BR InterCity embarked on a marketing campaign, following a successful introduction in 1992 of what were described as “Express Diner light menus”. This resulted in a 20% increase in the demand for restaurant car meals, and in 1993 more innovation was introduced, including the “Great British Afternoon Tea”

The “Express Diner” menu had a wider choice of meals, including: Rack of Ribs with Barbecue Sauce, Cumberland Sausage and Mash, and Steak and Kidney Pudding alongside existing items such as Fish and Chips and Rib  Steak. They also went on to include innovations as Chicken Tikka Masala, Beef Stew and Dumplings and Thai-style vegetables with rice , Jacket Potatoes and even Pizza. (Obviously a novelty in the 1990s!) Oh, yes, and of course a selection of reasonably priced wines was available for lunch and dinner.

Now I’m not suggesting that they were all a great success – but considering the sector’s profitability as a nationalized enterprise, they were giving it a go. At the same time this was happening, of course the 1991 EU Directive about separating infrastructure from operations was being put in place, and the next few years became chaotic, and these innovations dried up. 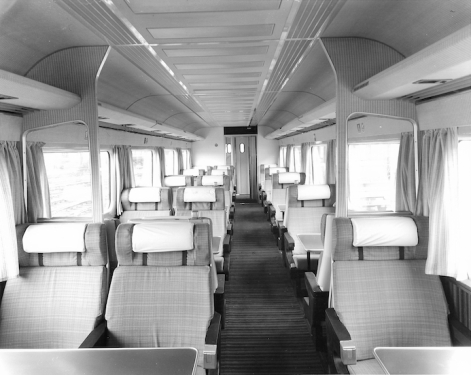 A nice spacious interior in the Mark III coaches from the late 1980s – in this case a First Class Open.

Another generation of the Mark III design was – unsurprisingly the Mark IIIb, but in this example a First Open with an on board telephone. After your meal, why not make a phone call from the train – so long as you had cash or a phone card in 1986 you could.

Today’s fare is a staggering list of coffees – or at least, various ways of serving coffee – together wraps, bagels, burgers and ciabatta rolls, along with a range of wines, beers and spirits, and even porridge. But that’s in the on-board shop section, alongside the usual vending machines. The only way to get a meal served at a table is in first class though, and only on certain trains – and the menu, like our tastes may have changed – and now includes such as mushrooms in a pastry case with butternut squash.

Not something that was common 20 years ago – but then neither were the veggie and deli specials. Even first class travel on some trains does not mean you get a meal, it may be just wraps, sandwiches or rolls for lunch, or perhaps grilled salmon, beef and potato pie, or salad for an evening repast.

But the on-board food and menu changes were not the only improvements to be planned for the early 90s, in BR days. The existing HST sets and coaches were goiung to be fitted with a range of facilities, many of which we take for granted today. This is what was planned in 1993 – 26 YEARS AGO! :-

Changes to the internal layout of the coaches was intended to break the saloon into smaller areas, with the Senior Conductor’s office located in the centre of  the train; near the buffet and accommodation for the disabled, for better customer accessibility.

Clearly some of these were incorporated into the Pendolino trains in later years – some 10 years after BR had planned to introduce them. 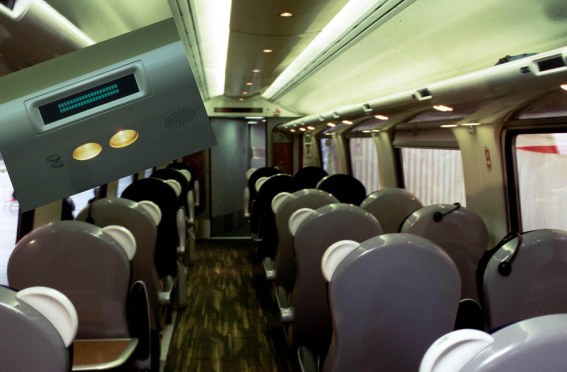 Not long after the 1993 innovations, along came the likes of the Pendolino and Voyager fixed formation trains from Bombardier and other makers, and hey presto, the above seat reservation details appeared – and of course in-coach entertainment.

When all is said and done though, it has always been unfair to cast aspersions at the state of the on-board catering on British Rail, as undoubtedly, there are occasions when even 20 odd years later, there are no doubt examples of failures. It is not nationalised rail system that was the cause of these issues, but maybe it was us – our changing tastes in food and service.

Maybe the initiatives were from BR’s InterCity Sector, but we just took a different path to get there. At least that sector was profitable – but then, maybe there is another story there too.

The whole idea behind this marketing campaign was to persuade travellers not to do this: