It was once described as the largest building project in Asia, and it carried its first fare paying passengers on 1 October 1979 when the 8.5km section of the Metro between Kwun Tong and Shek Kip Mei was opened to the public. 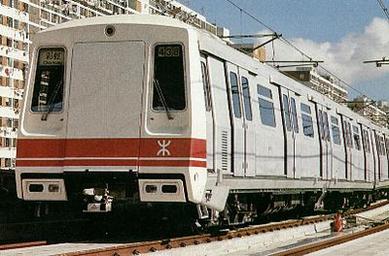 It is also 40 years ago this month that another order was placed with Metro-Cammell for the growing Hong Kong MRT, just three years after they were awarded a £35 million order for 140 trains in November 1976. GEC traction and Metro-Cammell’s combined success with the first orders, was followed in November 1979 by another £40 million order for a further 135 multiple unit vehicles for the Kowloon-Canton railway.   This came hard on the heels – just five weeks later – of the order for a further 150  metro cars worth £50 million for the MTR routes. 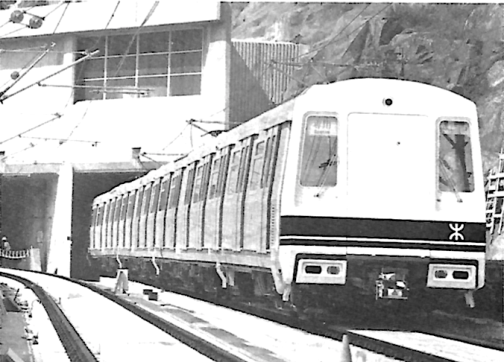 Almost straight out of the box. An original Metro-Cammell built MRT train for Hong Kong. Though much changed in appearance, passenger facilities and traction control systems, they are still at work today.

By that time, contracts worth over £100 million for electrical, mechanical and civil engineering work had already been placed with UK engineering firms. The initial multi-contract E11 awarded by the MRTC involved GEC Traction and Metro-Cammell, requiring close co-operation between the three organisations for the supply and installation of the electrical and mechanical equipment.

The first contracts on the Modified Initial System were placed almost ten years after a report on the problems of road traffic congestion was published by the Hong Kong Government. This was aimed at resolving the territory’s transport question further.

The mechanical and electrical contracts placed by the Hong Kong Government for the Modified Initial System (MIS), were awarded against an extremely tight schedule. The first train set was scheduled for delivery in 1979 and the whole 15.6 route km system was planned to open early in 1980.  The MIS for Hong Kong was swiftly followed by the Tsuen Wan extension, with the obvious demand for more rolling stock, and by 1982, GEC Traction had supplied more than 400 sets to the MRT Corporation.

Alongside this, the 34km route of the Kowloon to Lo Wu line was being doubled and electrified at 25kV a.c. using a simple, overhead catenary construction, similar to that used by British Rail in the UK.

In the export market, the Hong Kong MRT was considered the first major project success for GEC Transportation Projects, established as a subsidiary of GEC Traction and based in Manchester, to design and manage such turnkey projects. The Mass Transit system was entirely new, with two lines providing links between the Central District of Hong Kong Island and the business and residential areas of Kowloon. The mass transit railway used an overhead contact system, electrified at 1500Vd.c. It was intended at one time that this line would be  electrified using a shrouded conductor  rail, but it was decided that safety  margins would be improved using 1500Vd.c. catenary. At the same time, two extensions to the MRT were planned 10.6km to Tuen Wan, and the 12.5km Island Line, with completion in 1986.

Work began on the modernisation of the 34km Kowloon-Canton Railway, in early 1980, with the design, installation, supply and commissioning of the overhead equipment awarded to Balfour Beatty Power Construction. 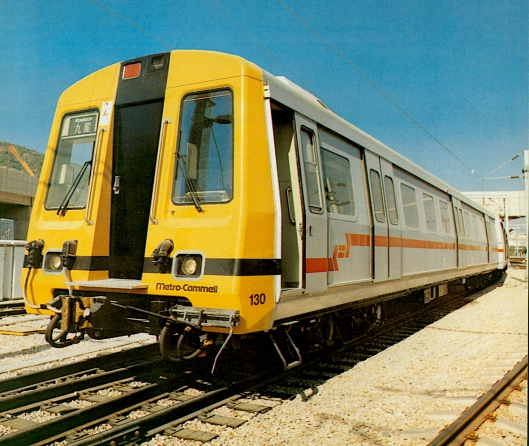 The original emu’s for the Kowloon-Canton Railway, built by Metro-Cammell, with GEC Traction power equipment. Initial tests were carried out on the Tyne & Wear Metro in the UK, before being shipped out to Hong Kong.                    Photo: RPB/GEC Traction Collection

Metro-Cammell  had also signed a contract with the Hong Kong  Government to supply 135 electric  multiple unit vehicles, to operate  inner and outer suburban services on the  Kowloon Canton Railway, which was being  modernised and electrified. The fleet of rail cars, worth £40million, were designed to be operated as  three-car sets with up to four sets running in  multiple.

The electrical equipment and traction power infrastructure was again being supplied by GEC Traction, from Preston and Stafford, with the MRT and extension lines electrified at 1500V d.c overhead, and the Kowloon to Canton route at the standard 25kV a.c., overhead.

The trains for both the  Mass Transit and Kowloon-Canton  Railways, were built by Metro-Cammell. The original mass transit cars  had a very high capacity, with seats  for 48 passengers, and standing room  for more than 300, in a length of 22m and overall width of 3m. At the time, the MRT cars were believed to have the highest capacity of any metro car in the world. With such high density, getting passengers on and off required the provision of five pairs of sliding doors on each side of the car. 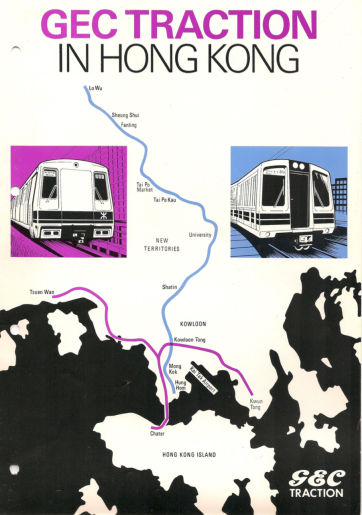 The cars for  the Modified Initial System, and Tsuen Wan Extension were arranged in six-car formations, and due to the demanding operating requirements, all axles were motored, to give a nominal acceleration of 1.3m/s 2. Though this was increased in practice, because many of the stations along the route were constructed on ‘humps’. The MRT cars, ultimately in eight-car formations were required to operate at 90 seconds headway between trains, and a two minute intervals with ATO (Automatic Train Operation) in use.

The body shell was common for the three types of car on the KCR, and similar to that for the Hong Kong Mass Transit cars. They differed largely only because the KCR sets had fewer side doors, and narrower gangways between cars than the MRT vehicles. Electrically the KCR propulsion equipment was almost entirely derived from that supplied to British Rail.

GEC Traction supplied the propulsion equipment, which included conventional, camshaft control systems,· although consideration had been given in the early stages to using more advanced, thyristor chopper control. An important advantage of using chopper control is the system’s ability to regenerate during braking, but the hump layout ofmany ofthe mass transit stations rendered its application less useful. By 1982, Metro-Cammell had received orders for 558 vehicles for the mass transit system, with the final contract covering 22 power and 106 trailer cars for the Island Line extension. A total of 18 powered cars were ordered with thyristor control equipment in later years, in orders worth some £l0m.

In the UK, during the 1970s, the Tyneside Metro was constructed, which proved beneficial for both Metro-Cammell and GEC Traction, since te first Hong Kong MRT cars were sent for trials on the Tyneside Metro’s test track, prior to dispatch to the Far East. 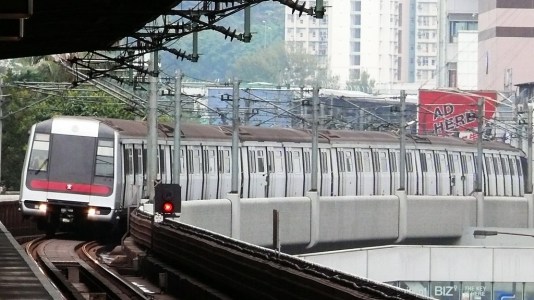 Still recognisable as a Metro-Cammell MTR train, despite the modifications to the front end, as the train enters one of the elevated stations on this hugely busy system.                 Photo: ThomasWu726 – Own work, Public Domain, https://commons.wikimedia.org/w/index.php?curid=6005011

The orders for Metro-Cammell and GEC Traction continued to come in during the 1980s, with additional MTR trains for the Island Line extension, and more three-car trains for the KCR. The last order for what was later classed as M-Class trains, were delivered from Metro-Cammell in Birmingham in 1988/89. However, it was not the last order, as in 1992, and order was placed with GEC Althom (who had by then acquired Metro-Cammell), for another 64 cars, for the MRT.
The MIS trains built by Metro-Cammell were – indeed are – classified as “M-Stock” by the MRT in Hong Kong, and they have undergone various improvements and changes. The initial modifications included altering the front end, to “modernise” its appearance, and the fitting of passenger information systems. All of the original builds were fitted with GTO Chopper control between 1992 and 1995.

This final order included an option for 24 further vehicles, and all 88 were supplied to Hong Kong as a set of parts, which were assembled at the Kowloon Bay Depot. Some of these – by now classed as H-Stock – were refurbished for use on Hong Kong’s Disneyland Line.

The original Kowloon-Canton units were designed for longer journeys, and included slightly different layouts or inner and outer suburban trains, but the general construction is similar to the mass transit trains, with main structural profiles common to both designs. In three-car sets – up to four sets could be coupled in multiple to give a 12-car train), the outer suburban sets have a capacity for 884 passengers and 961 for the inner suburban sets. With full width driving cabs at each end, every three-car set is a self-contained unit.

We see climate as a 21st century issue, but of course in tropical, and sub-tropical climates, there has always been the ever present problem of torrential downpours, from storms – be they hurricanes or typhoons, along with dramatic temperature variations. The climate is such in Hong Kong, that the vehicles, and their passengers were expected to withstand extremes of temperature, from 0 to 40 degrees, up to 100% humidity, and even required to run through flood water in some sections, as a result of the impact of Typhoons. 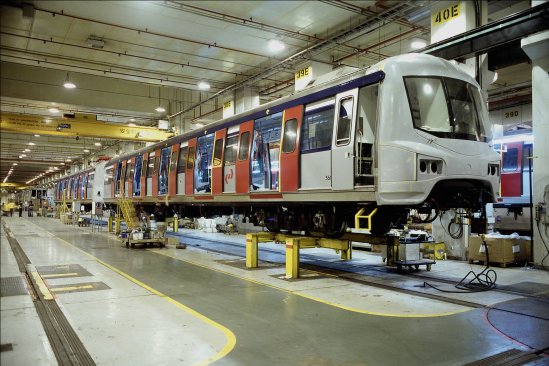 The original Metro-Cammell built KCR trains were refurbished in the late 1990s by Alstom. This view taken in the Hong Kong Kowloon Bay Depot workshops shows work being carried out.      Photo: Alstom/RPB Collection

These trains are still in service today, but have undergone a number of changes, and the original Hong Kong MTR and Kowloon-Canton Railways have seen considerable changes and modifications since the 1980s.  The original KCR trains were converted by Alstom to 12-car sets, and the original 3 sliding doors were increased by the adition of a further 2 doors per side, and an emergency door in each cab front. The cab fronts were also modified, and entirely new passenger information systems were installed – all of this work was carried out between 1996 and 1999, to extend the life of these trains. Further changes included the fitting of ATO/ATC control systems, and today, 20 years later, they are still in use – now classed as Mid-Life Refurbishment Train (MLR). 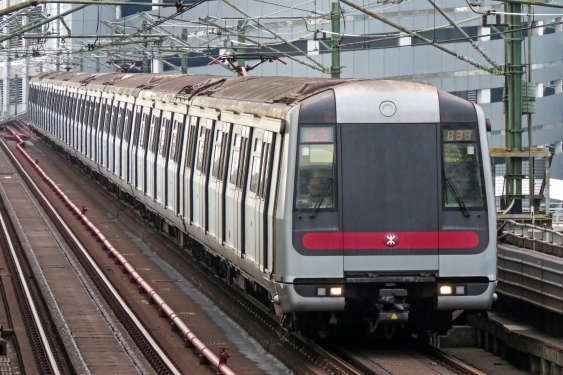 So much has changed over the years in Hong Kong, what with the new airport at Chek Lap Kok, and the suspension bridge carrying the metro to the airport, along with further new lines, and a link to the Disney resort. On the railway, several refurbishments of the original M-Trains – which are still running, and the fitting of automatic train Control (ATC), the now almost universal Platform Screen Doors on metros around the world – but the trains from Washwood Heath are still running – for now.

According to reports announced in 2015, the MTR Corporation is to spend HK$6 billion on its largest- ever order of trains from a mainland manufacturer. 93 eight-car trains will replace all of the Metro-Cammell currently operating on the Kwun Tong, Tsuen Wan, Island and Tseung Kwan O lines.

Mainland maker CSR Qingdao Sifang is delivering the trains between 2018 and 2023.