The BREL built “Express Sprinter” dmu’s of 1989-92, constructed at Derby’s Litchurch Lane Works are some 30 years old now, and have been dispersed around the UK through BR’s Regional Railways Sector, to the post-privatisation TOCs.  The 40 two-car sets allocated to Abellio/Scotrail may soon be receiving another minor refurb, with a proposal to fit LED lighting in the driving cabs and saloons – or perhaps not.

Extract from the August 2019 procurement notice for Abellio Scotrail

The successful tenderer was to be retrofit the 40 2-car sets with the fitting – and the ongoing management of these installations, and the original tender was announced in December 2018, then cancelled, and re-posted in July 2019. Both the interior lighting question and these last BR built multiple units have had a bit of a chequered history, and their design has been unkindly referred to in some quarters as a “garden shed” approach. Yet still, after more than three decades of service, they are fulfilling some of the intermediate to long distance passenger train duties – at least in Scotland. 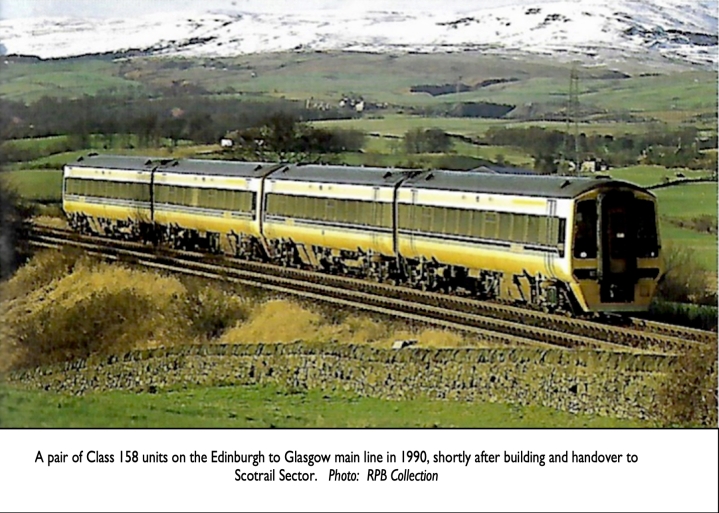 The Class 158 “Express Sprinter” were the 3rd gestation of the British Rail “Sprinter” range of 2nd generation dmus. Unlike the earlier “Provincial Sector” designs, these were not designed from either older emu designs, like the ‘Sprinter’ series, but they were driven by the 1980s financial constraints on BR. At the time, between 1989 and 1991, the application of inter-city style seating and layout for these longer distance regional services were still dependent on the first generation dmu’s. These were by this time more than 30 years old, and increasingly unreliable, and the refurbishment programmes of the 1970s really did nothing other than a new paint job, or interiors. Then there was the ongoing cost of asbestos removal from the 1950s designs, which, coupled with the financial strictures and operations in the days of sectorisation in the 1980s, ultimately, led to the building of new multiple units.

The end result was the “Express Sprinter”, built at Derby, to the BREL design, and using the key features of the main line and inter-city rolling stock designs, to meet the increased needs and performance criteria for Provincial Sector. The BREL built 158s were first put to work on the Scotrail Sector, over the time when BREL was being privatised by the government, firstly as BREL Group Ltd under ABB Transportation, and later as Adtranz (ABB-Daimler Benz). Each of which is now consigned to the history books. BREL built 447 vehicles, most as 2-car sets, but with a small number as 3-car, and the last was handed over in 1991.

The idea of this latest modification for Abellio ScotRail Ltd was to gain the benefits from energy saving and an increased lighting lifespan on these trains. The most recent upgrade/refurb of the Scotrail units was carried out at the now closed Springburn Works, then operated by Knorr-Bremse, back in 2015.  The work carried out then included the current ‘Saltire’ livery and modernisation of the interiors with new carpets, surface finishes and toilets.  At the same time, the 137-seat trains were equipped with new CCTV systems and automatic passenger-counting systems.

The 2015 renovation and upgrade/update work was carried out at Springburn under the Railcare banner.

So, new lights for old may be seen as another minor, but useful upgrade to this long-lived type of rolling stock.  The technology itself may not seem so new, but ranks up there with proposals some years ago that one single light source could supply – through the use of fibre-optic cable – individual lighting throughout a train.  Gone are the days of 60-watt incandescent bulbs in the centre of the passenger compartment – now departing are the harsh glare of fluorescent tubes, with or without luminaires on the coach ceiling.

Some 17 years ago, I wrote about the advances in lighting technology on stations and on trains, for passenger circulating areas, and for on-board functions.  It was back then when the use of laser-optics was being advanced as the way forward, like this:

The Future is Fibre-Optic

This seemed to be the way forward back at the beginning of the 21st century, and now, approaching ¼ of the century, the use of LED (Light Emitting Diodes), has become the lighting source of choice. In fact, LED tube lighting is an ideal candidate for retrofitting to the good old standard fluorescent tube lighting on trains, with some designs being a simple replacement of the older tubes, using the same fittings. The technology itself is claimed to result in an energy saving of up to 75%, and has been in use with TfL in London for the past couple of years, reducing both energy and maintenance costs.

Shining a light on historical sites too, LED lighting has been installed at Rainhill on Merseyside – so even the location with one of he greatest claims to fame for Victorian ‘new technology’ is now an example in the 21st century – 190 years later. Of course, today everything has to have the adjective “smart” attached to it, and lighting on the railway is no exception, so now we also have ‘smart lighting’ – for which no doubt an ‘app’ will be available – soon?

I started off this little item just thinking about the Class 158 and its new lights, but there is much more to lighting on the rail network today, so we will revisit this story for a more detailed look at the technology shortly. So much for fibre-optic lighting!