60 years ago on the 27th Nov ember this year, Britain’s pioneer 25Kv a.c. electric locomotive was officially handed over to British Railways. Then numbered E3001, it was to be the first of a long series of successful  locomotive designs for the West Coast Main Line (WCML). Within this series there have  come to be seven basic designs, and a number of sub-divisions of the classes ALl to AL7. Although the last of these was never actually  introduced under the old title of AL7, but  designated Class 87 with the new “TOPS”  locomotive codes, the family likeness remains  very strong despite the detail alterations to the appearance of the latest type.

87005 – the final design of the 1st generation electric traction for British Rail, provided the motive power for the completion of the 400+ miles of route from London to Glasgow in 1974.

The choice of 25kV a.c. electrification to be used on B.R. was the subject of exhaustive investigation and comparative examination with other arrangements. Indeed, as there was no a.c. overhead  main line contact system in regular operation, B.R. decided in 1951  to convert the Lancaster-Morecambe- Heysham section to 50 cycle, 6,600 volt, to  evaluate the potential. The only alternative to  an untried a.c. system was the l500v d.c. arrangements favoured by the former LNER for its Manchester-Sheffield-Wath and Liverpool St.-Shenfield lines.

However, by the time of the announcement in 1955 of B.R.’s multi-million pound modernisation and re-equipment programme, a not inconsiderable degree of experience of operation of an a.c. system had been acquired. It was perhaps the potential of the system, using 25,000V from the National Grid, rendering it economically superior to the d.c. system that finally won the day.

The decision was announced on 6th March 1956, that 25Kv a.c. would be the system of electrification used by British Railways on the WCML between London (Euston), Manchester and Liverpool, and additionally on the East Coast Main Line (ECML), between London (King’s Cross) and York and Leeds. The optimism generated through the Modernisation Plan for the electrification of two main routes was relatively short lived however. By 1959, it was seen that this would not be possible within the time limits proposed in the 1956 White Paper, and consequently a re-appraisal of the Modernisation Plan provided for the introduction of diesel  traction “without prejudice to eventual electrification” on the main line where this was to be deferred. Another factor in this re-evaluation was the enthusiasm with which the private car, road building, and the removal of some restrictions on licensing of road haulage, and goods transport.

So, does that mean that between 1978 and 2006, the increase in the electrified network was only 721 miles, and the 2006 total route mileage was just over 7,600 miles, but 38 years earlier the route mileage was 11,100 miles. A reduction in the size of the network of 3,500 miles, and at the same time adding just under 400 miles to the electrified main lines with the East Coast Main Line project – delayed from 1956.

There was of course a Department of Transport / BRB report on the subject of main line electrification in 1981, which offered a number of options to expand the network. From the perspective of the 25kV a.c. schemes, the final report’s “Option II’ – the ECML, Midland Main Line, Glasgow to Edinburgh, and Edinburgh to Carstairs was the option followed.   This was described in the report’s accompanying table as a “modest” expansion of the network. Ironically the recently completed electrification from Preston to Blackpool was included in the “Base Case”, and for completion in 1984 – a mere 35-year delay for that particular line. Slightly less of a delay was incurred by the Western Region (now GWR) main line out of Paddington. That scheme was included in the more advanced “Option III” ‘Medium Case’ for completion by 1996 to Bristol, and by 2002 to Plymouth – ah well, some of it got completed, but all has been hampered by the tragedy of privatisation.

Penultimate days of British Rail operations, with the classic motive power for the West Coast Main Line, here seen at Carlisle in the late 1980s.

The lines coloured black were the electrification proposals for Option III, which included the ECML as well as the Western Region to South Wales

10 years after the 1981 report, the West Coast Main line shown in this map was planned to receive new IC225 locomotives, as delivered to the East Coast Main Line, when it was completed in 1991

Today we are still waiting on the possibilities of the HS2 / HS3 developments, and have pressed ahead in the last 10 years or so with the Paddington to South Wales, Midland Main Line, Glasgow to Edinburgh central belt, and a number of smaller connecting lines. These latter have mainly been around big cities; Manchester, Leeds, etc., with additional links to Blackpool, and specialist lines such as that connecting London with Heathrow Airport, or the Crossrail projects.

Looking back at the 1978 BR discussion paper, the current routes and electrified network was covered then by Options B and C for the Inter City Routes strategy. Had the strategy been implemented back then as Option C – the electrified network would have reached 5,300 miles, some 2,200 more than was achieved by 2006. However, the real issues that delayed the strategy was the lack of will to invest, and the mounting subsidies paid to BR during the later 1970s and 1980s.

In the nearly 40 years since, some work has been done, but the UK’s once extensive railway industry – both private and BR’s own workshops – has largely disappeared, and any achievements have been wholly dependent on the success of imported technology. One of the most telling observations in the 1978 discussion paper was in the concluding paragraphs, where the BRB stated:

“A railway system needs to be provided which enables our successors to run an economic transport system in the year 2000 and beyond If railway electrification is to be part of that, as now seems probable, a start needs to be made now. If the country has available the capital for regeneration of industry and preparation for the energy conditions of the next century, it would require only a very small proportion of this investment to convert the main public bulk transportation system to electric power.”

In that same booklet, it was pointed out that the UK was well behind in the proportion of its network that was electrified, coming 17th out of 21 countries, from Norway to Belgium and Japan.

Today we are still waiting on the possibilities of the HS2 / HS3 developments, and have pressed ahead in the last 10 years or so with the Paddington to South Wales, Midland Main Line, Glasgow to Edinburgh central belt, and a number of smaller connecting lines. These latter have mainly been around big cities; Manchester, Leeds, etc., with additional links to Blackpool, and specialist lines such as that connecting London with Heathrow Airport, or the Crossrail projects.

By 2016/17 that position had changed, and the UK had slipped 3 places to 20th, or second from bottom, and yet the % of the network now electrified had risen to 33%.

So according to this latest table, another 5,120 miles of route have been electrified in the UK since 1978. By far the longest route to receive its 25kV a.c. overhead contact system was the East Coast Main Line, from London (Kings Cross) to Edinburgh, which was completed in 1991 – so that was another 400 miles. After that, there was a plan to electrify the route from London (St Pancras) to Sheffield – although that’s only reached as far north as Leicestershire, before being controversially abandoned. The completion of the Channel Tunnel was the driver to construct a high-speed link between the tunnel and London (Waterloo), and with minor extensions added a further 100 miles by the time HS1 was opened in 2003.

The Western Region main line, or after privatisation, the GWR main line from London (Paddington) to Bristol and South Wales has only been completed in the last couple of years – but only as far as Bristol Parkway. The piecemeal, stop-start nature of progress on electrification of main lines since the mid 1990s has spectacularly affected interoperability across the whole network. The latest trains on the old Western Region main line to Bristol are hybrids, and have to operate as diesel trains in the non-electrified sections, obviously at lower speeds. The plan to electrify the main line to South Devon, Plymouth and possibly Penzance is not even on the horizon in the 21st Century.

The additional 4,000+ miles that have been electrified since 1978 includes the completion of the Edinburgh to Glasgow corridor, and the link to the West Coast Main Line at Carstairs, together with numerous other ad-hoc changes and extensions. This activity included work to extend the overhead out of London (Liverpool Street) into East Anglia; Cambridge and Kings Lynn.

In 1981, the Government published a final report advocating the case for main line electrification, and in a couple of key points made a recommendation that more, and not less electrification at a faster rate would offer best value for money. These are two of the key paragraphs that make those points:

So how did we do? Well, not so good really.

Currently, in 2019, Crossrail – which links in to the GWR main line west of London – is still not complete, and the plans for a route between Oxford and Cambridge, and a north-south Crossrail2 are still only on the drawing board. The very latest activity on the London (Euston) to Birmingham – HS2 – is looking more likely to be cancelled than progressed, whilst the demand for increased electrification between Liverpool, Manchester, Leeds and beyond is growing by the day. The so-called Northern Powerhouse Rail is clearly an essential need, to link the economic centres in the North of England, which, between Liverpool, Manchester, Leeds/Bradford, and Tyneside/Wearside has a population of well over 7 million.

In February 2019, “The Engineer” carried out a poll of its readers to see what form of motive power would be 1st choice to replace the diesel trains – all of which will be gone by 2040. In the poll some 43% of respondents advocated full electrification. 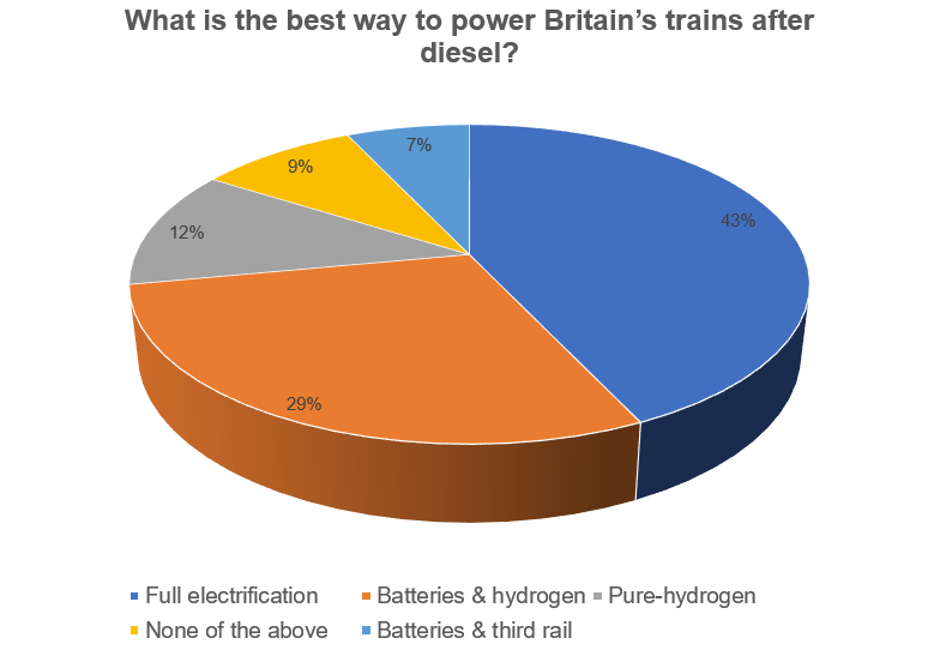 Another 29% were in favour of batteries+hydrogen power, with another 12% advocating pure hydrogen powered trains.

Hitachi Class 800 on the GWR main line – this is one of the 36, 5-car dual-fuel sets for use on the non-electrified as well as the electrified sections of the route. Photo: GWR – Creative Commons Attribution

If the recent progress of electrification is anything to go by, I doubt if any of these will progress very far, and we will, as usual be subject to the same uncertain, start-stop process that we have seen for the past 20 years. But, electrification is, and remains the only sustainable option – both in energy cost, and environmental impact.

So, 60 years on from the handover at Sandbach in Cheshire, in November 1959, we have come so far, but there is still a long way to go. The ‘Northern Powerhouse Rail’ proposals include some aspects of planned 25kV electrification from the 1950s, 1960s, and late 1970s, and the line from Manchester to Leeds is more than 40 years late. There has been very limited activity on rail, and especially electrification work over the past 20 years, and today’s ‘Northern Powerhouse Rail’ ideas are not a fitting reflection of the work completed in 1959.

The lines shown on this map in light green are for new electrified routes, and the connection from Manchester to Leeds was identified as needing electrification almost 40 years ago – and it is still pending!

One of the new generation Azuma high-speed trains alongside one of the remaining IC125 (HST) sets at Leeds Station. By Stephen Craven, CC BY-SA 2.0, https://commons.wikimedia.org/w/index.php?curid=79978602