Back in the 1980s, as manufacturing industry – especially the primary industries like steelmaking –was coming to an end in the UK, steel railway rails were still being rolled in England’s North West.   The then BSC Track Products division at Workington in Cumbria was rolling 250ft (76.2 metres) long rails, to UIC standards deemed ‘Normal’, ‘wear resistatnt’ and ‘premium wear resistant’ grades.  The steel rolled into rails at Workington was produced by the Basic Oxygen (BOS) process at Lackenby (Redcar) and Electric Arc furnaces at Sheffield.

The early days of steel rail production in North West England. Regrettably the source of the image is unknown.

Workington was the rail production centre in the UK, mainly from the 1950s to the 1980s, and prior to that Barrow-in-Furness had been the home of rail production.  Indeed much of the rail output produced at Barrow was shipped around the world, and can be found anywhere from the USA, to Finland and Australia.

The global centre of rail production seems to have shifted to Austria and the heart of Europe these days, with Linz, Graz and Leoben-Donawitz taking the places of Barrow-in-Furness, Redcar and Sheffield. 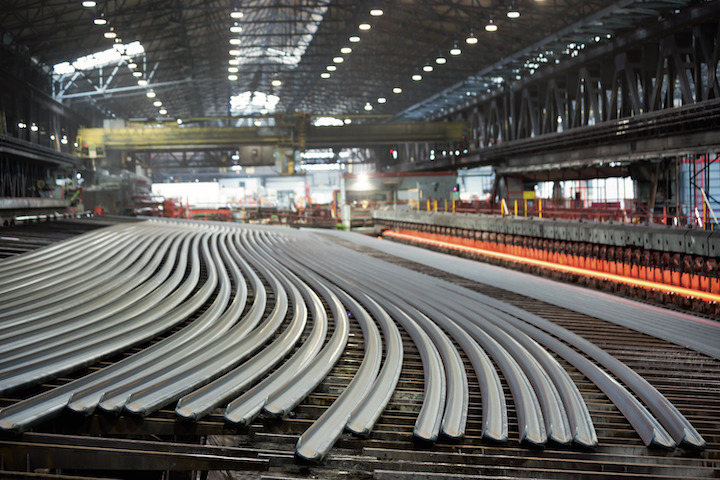 Where it all starts in 2019 – the Voestalpine plant in Leoben-Donawitz. Photo: Voestalpine

Today (4th July 2019), 108 metres long rails are being carried – by rail – from Leoben-Donawitz, just to the north west of Graz, through Germany and on to Belgium, and via the Channel Tunnel to Dollands Moor, using a DB Cargo Class 66.  The rails are being rolled at the Voestalpine, before being loaded onto a special train – and this is certainly an exceptional load – the train cosnsists of 18 wagons, with each 108-metre steel rail spanning six wagons. 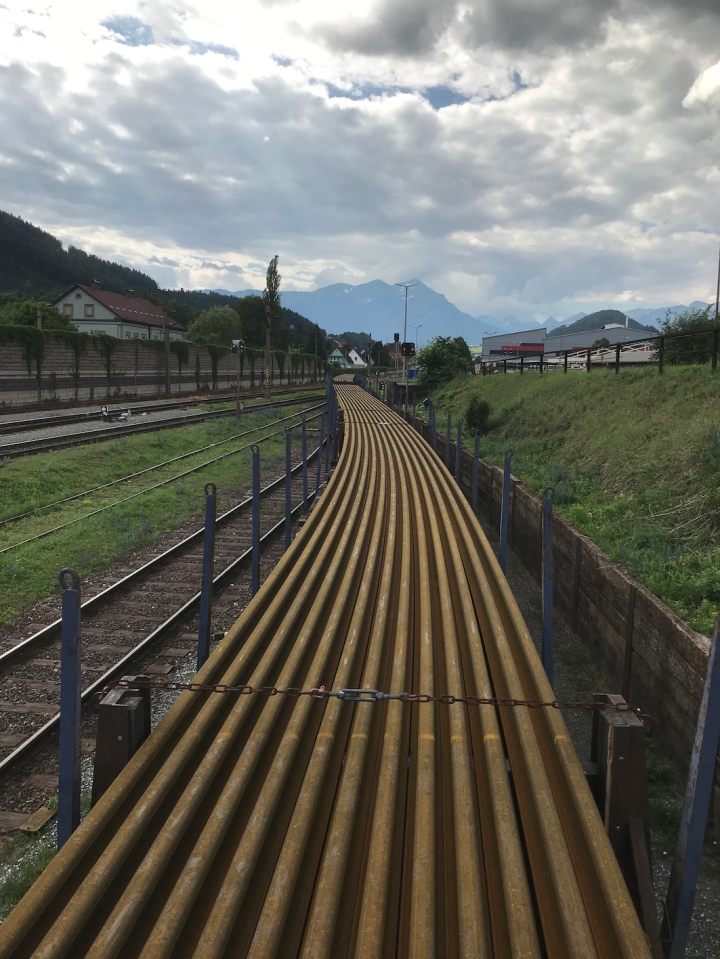 The train as it leaves Leoben-Donawitz in Austria Photo: DB Cargo

DB Cargo are running four such trains across Europe to the UK from Leoben-Donawitz to Aachen West, by DB Cargo Belgium on to Antwerp, by ECR on to Calais-Frethun, before DB Cargo UK pick up the final leg on to Eastleigh.

“It’s fair to say that this is indeed an exceptional load. Great care and skill have been required to ensure that our cargo can navigate a safe and smooth passage across the European network to its final destination.”

This impressive train with its 108 metre long rails will  be taken forward on Friday 5th July from Dollands Moor to Eastleigh’s East Yard early on Saturday morning 6th July.