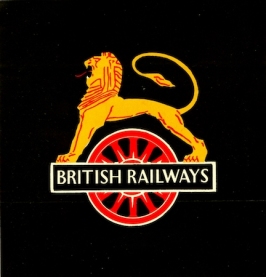 The first BR crest was something of a misnomer, since it implies a heraldic device, and this it most certainly was not. It was a symbol devised by the Railway Executive of the British Transport Commission for use on its locomotives, and was referred to as a “totem”, and as such British Railways was entitled to display it in whatever manner they chose, The ‘directive’ issued stated that it should face FORWARD on BOTH SIDES of locomotives. There was no question of the College of Heralds being involved, since it was not a heraldic device.

In this respect therefore, the contemporary literature is correct, particularly the reprint of the “Railway Pictorial  and Locomotive Review” brochure from July 1949,which in reference to the general details and planned applications is correct. This is also borne out in photographs  of the period. I have not yet come across any with the crest facing the rear of the locomotive on the right hand side.

The first colours and lettering remained in place until the end of steam traction, with the exception of the blue livery for express passenger types. In the early 1960s, regional variations in colours occurred, but the only major change in totem, crest or logo took place in 1956, before the corporate style with the double arrow totem appeared everywhere until, and in some cases after privatization.

The second style of crest was a heraldic device, and registered as such with the College of Heralds. Or, more precisely, the College of Arms in England, and the Lyon court in Scotland. The badge comprised a demi-lion rampant (not a lion and mangle wheel, or even a ferret and dartboard!!) – the British Lion, holding between the paws a silver locomotive wheel.

The lion was issuant from an heraldic crown of gold on which were arranged the rose, (for England) the thistle (for Scotland) the leek (for Wales), completed by an oak leaf representing all Great Britain. The whole was enclosed in a gold circle and flanked by the words “British Railways” in serif gold lettering. The design was prepared in consultation with Dr. C.A.H.Franklyn. The first locomotive to display the new crest was BR Standard Class 7MT No. 70016 “Ariel” at Marylebone Station on 21st June 1956.

Quite a number of’ locomotives were turned out  in 1956/7 with the crest facing forward on both sides, which would suggest that an assumption was made on the part of the depot  staff that its application on a locomotive was to be the same as the earlier 1949 “totem” – with the lion always facing forward.  Not all depots would have made that assumption, obviously, hence  there were only a small number of locomotives turned out with the crests facing forward on both sides. The College of Heralds/Arms were quick to point out that wherever any part of the achievement was used, the lion must be heraldically correct, consequently the lion was always supposed to face left. I was going to state ALWAYS. FACED LEFT, but this would not strictly be correct, since there are numerous photos illustrating crests facing forward on the right hand side, i.e;  the lion would be right facing. 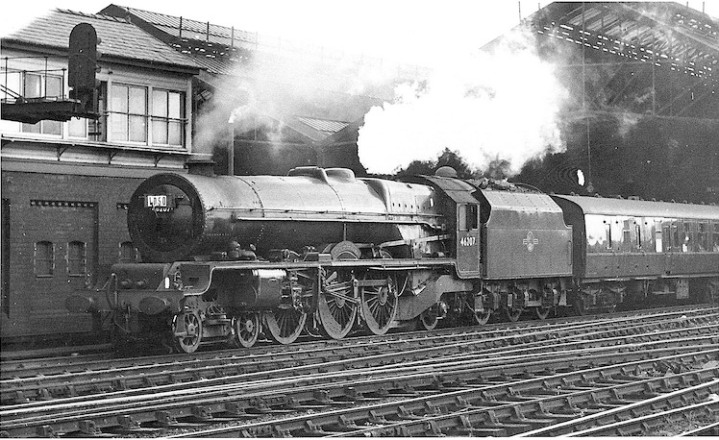 These notes relate to the circumstances of application of the crests and the change(s) insisted on by the heraldic authorities when crests were applied incorrectly for a short period. It is not possible to state, at-the time of writing, the precise dates when the “change” referred to in the 1956 crests was insisted upon by the authorities concerned.

The post 1956 crest is facing the right way in this shot of preserved ex-GWR Castle Class No. 7027 “Thornbury Castle” at Buckfastleigh in 1990.  (c) Rodger Bradley

The obvious suggestion to be made is that since the application of new paint schemes, insignia, etc., was so much in the public eye, it would not be unreasonable to EXPECT a maximum time limit for “regular” mis-application of the new 1956 transfers to be in the vicinity of SIX MONTHS; from  between June and December 1956. References to the new crest are contained in the “Railway Observer” for July 1956. It has not so far proved possible to locate any reference to the “changes”. No such difficulties apply to the earlier crest used between 1949 and 1956, and the principally correct reference source is the one mentioned.

Again, contemporary photographs of the later crest can be found in either private collections, or albums, or the principal magazines of the period, including a number of photographic books. In particular, the “Railway Magazine” and “Trains Illustrated” for 1956/7.

Preserved Jubilee passing Dalton-in-Furness with an eastbound special in 2018.  The lined black looks good on this loco with the 1949 totem, but most of the class received the lined green livery.  (c) Rodger Bradley