The firm of Davey Paxman, then Ruston Paxman, and in its final guise of GEC Diesels Ltd was established in 1865, in Colchester, Essex.  Their original product line included agricultural machinery, steam boilers, portable steam engines, and stationary engines, with a wide range of applications in mind.

It was not until just before the First World War that they took an interest in the possibility of ‘oil engines’, with some of the early designs arranged horizontally, just like the company’s steam designs.  From around 1925 they began designing and building engines in the more conventional, vertical layout.

What was to prove revolutionary in diesel traction’s use of quick-running engines, allied to innovative mechanical and ovcerall design. This view shows the very first diesel locomotive on British railways, built by the LMS, with its Paxman engine, on what was essentially a steam engine chassis.      Photo; Lens of Sutton

Only 5 years later, in 1930, as the LMS railway began its experiments with diesel rail traction, and the first diesel engine was installed in LMS prototype shunter No. 1831.  The engine was a 6-cylinder machine, developing 412hp at 750rpm, and designated type 6XVS.   The railway company constructed the mechanical portion of the locomotive, based around the frames of a steam engine, and other details, whilst the Paxman engine was the first rail traction diesel engine, installed in the first diesel locomotive on the standard gauge, for a major British railway company.

However, Paxman’s global reputation was based around quick-running ‘vee’ form diesel engines, and it began to make inroads in this area from around 1932, and with that step they were wholly successful, be it marine, stationary or rail traction.  Davey Paxman’s fortunes were assured.

The Second World War provided a pivotal platform for the technology,  and the Paxman 12TP engine – originally designed for a special assignment – was used in the British Landing Craft, and of course played a key part in the D-Day landings.  From that event 75 years ago, more than 4,000 Paxman 12TP engines were used in every assault operation carried out by Allied Forces in Europe.  This same engine design was refined for wider commercial use in the 1950s, including rail traction, and re-designated type RPH.

The early 1950s saw the introduction of the YH range, direct fuel injection, and 4-valve cylinder heads.  The refinements of these designs, with ease of maintenance, provided an ideal platform for railway locomotives, with many examples used in branch line, shuntin, and in later develoipments for main line operations.  The quick-running 4-stroke diesel had certainly come of age.  By the end of the decade, a further development of these engines appeared in the shape of the “Ventura” range.

The latest design was developed to meet the requirements set by British Railways, building on the design and construction of the RPL and YH engines, incorporating advanced engineering features, and competing with the best European builders were offering.  In fact, these engines were built under licence by Breda for Italian State Railways’ Class 343 locomotives, whilst further east in Ceylon (present day Sri Lanka), “Ventura” engines were fitted to a fleet of diesel hydraulic locomotives for shunter/trip and main line duties.

On British Railways, the first of these new engines were fitted and trialled in one of the Western Region’s Swindon built “Warship” Class diesel-hydraulic locos – No. D830 ‘Majestic.  The “Ventura” engines were also retro-fitted to 20 of the North British Bo-Bo diesel-electrics, developing 1,350-hp at 1,500 rev/min engines, following the disappointing service experience with the locomotives’ original power units.

One of the NBL built Type 2 engines after refitting with Paxman engines proved much more successful.

Another order from British Railways, was for power unist for the last diesel-hydraulic type used on the Western Region – the Class 14 0-6-0 – together with 6-cylinder versions for the Southern Region’s “Electro-Diesels”.

The experience with the “Ventura” design also provided background for the next step in the development of the Paxman range.  Paxmans’ working with British Railways and the MOD (Royal Navy), a new range of high-speed diesels, in the shape of the “Valenta” series were created.  These new engines were the same size and shape as the “Ventura”, but although of the same bore and stroke, gave 40% – 50% more horsepower.

The heart of high-speed, the Paxman Valenta engine. Powerful and efficient too – a good combination for rail traction use.

It was these engines that were fitted to the HST, IC125, high speed trains that provided the mainstay for British Rail’s express passenger services for more than 45 years.  Some are of course still in service today. 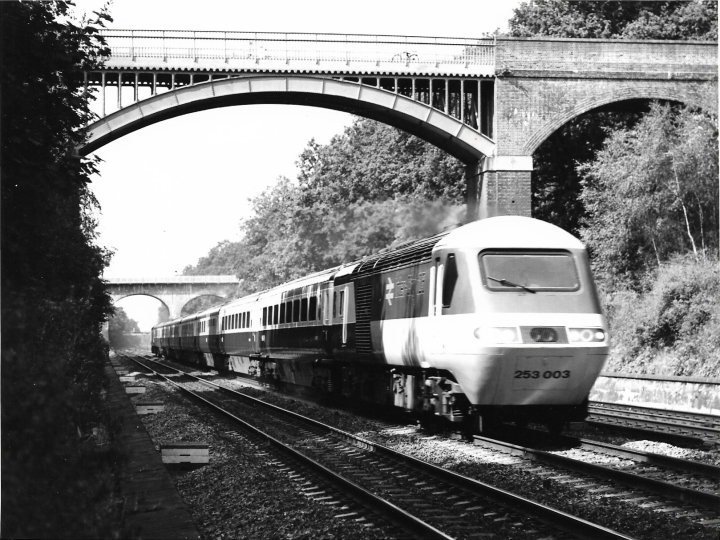 On the Western Region, the HST sets – or IC125s were the mainstay of high-speed services. This is a typical view of 253003 running through Sonning Cutting between Reading and London Paddington. Photo; British Rail

The prototype HST was fitted with a 12 -cyl. Valenta 12 RP200L, charge-air cooled engine developing 2,250 bhp (UIC) at 1,500 rev/min.  Announced in 1970, the production sets would consist of a pair of power cars equipped with these powerful diesels at eaither end of a 7-car formation of Mark III coaches, which included two catering vehicles.  British Rail’s plan was to order 150 of these trains over a 5-year period, which it was suggested could be extended to 10 years up to 1985, starting in 1975.  They were set to work on both the London to Cardiff and London to Newcastle routes. 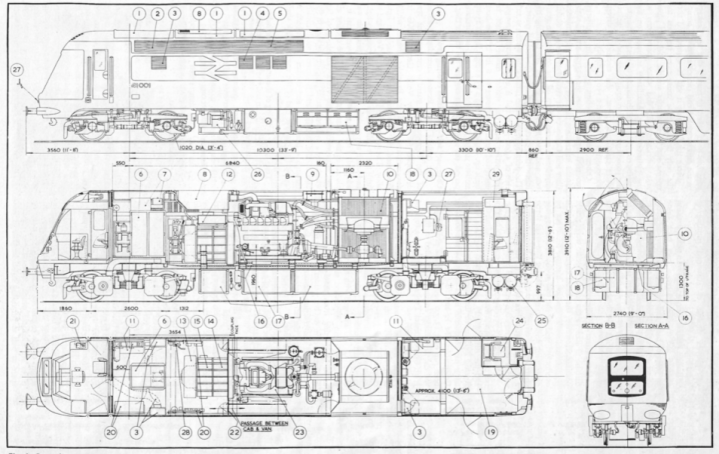 This diagram shows the compact layout of the prototype HST power car. The buffers were of course not used on the production series.

In their HST guise, Paxman’s “Valenta” engines were definitely at the top of the tree.  They achieved no less than three world speed records.  The first was on 12th June 1973, when the prototype reached a speed of 143.2 mph between Northallerton and Thirsk on the East Coast main line.  The second, 22 years later, when on 27th September 1985 the Tyne-Tees Pullman, with Paxman power ran from Newcastle to London King’s Cross (268 miles) in under 2 hours 20 minutes, achieving a start to stop average speed of 115.4 mph.  Finally, just two years later in 1987, with power cars 43102 and 43104, the world speed record for diesel traction was broken again.  Over a measured mile between York and Northallerton, a speed of 148 mph was recorded, with peaks at just under 150 mph.

Still on active service in the 1990s, 43113 is seen here running through the approaches to Edinburgh Waverley, but westbound through Prines Street Gardens.   (c) RPBradley

The longevity of their success suggests that Paxman high-speed diesels were probably the finest diesel power plant designed and operated on rail.