Today in the UK, the number of rail passengers – we are repeatedly told – is at the highest its ever been, and there has been rapid expansion over recent years. As an arch-sceptic on statistics, I wonder what ‘truth’ lies behind these reports.   In the area where I live, the volume of cars on the local roads is much more today than say 30 years ago – and yet the local economy has declined, with fewer industries. Many of the cars on the roads have only a single occupant, where do they go where do they work – has the ‘school run’ replaced the trip to work at the factories that have either closed, or been reduced in size.

Passenger numbers have indeed increased – in some examples quite dramatically. The statistics record passenger kilometres travelled, and comparing both the rates of increase over the past 10 to 15 years with our European neighbours shows some interesting contrasts. It may be that the number of passenger kilometres would increase because there are many more commuter – short distance journeys – not that passengers are travelling further.
The UK still has a long way to go before it catches up with France and Germany – each of which have commuter journeys in and around major cities – but since around 2010/11, it has grown at an increased rate. Comparing the numbers from 2017, the UK has seen passenger-kilometres rise by 13% over 2012, and by 37% since 2007.   For France these same figures are 6% and 18%, whilst in Germany these numbers are 2% since 2012 and 21% since 2007. 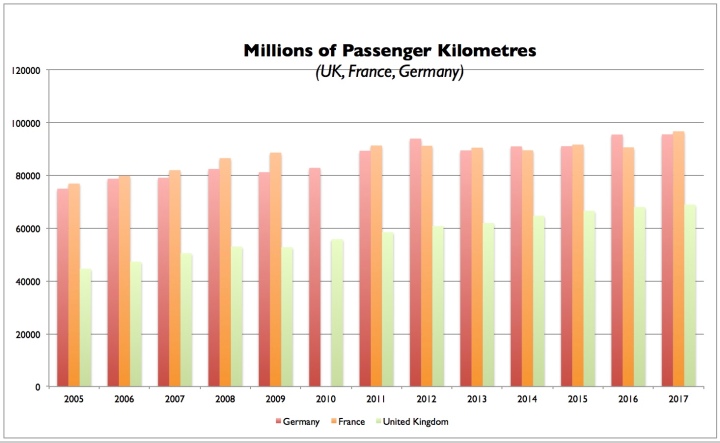 That said, the annual rate of increase in the UK has declined in recent years, between 2014 and 2017 the rate has fallen from 4% to 1%. Is it because of the slower infrastructure and rolling stock investment rates, or higher ticket prices per kilometre than in two of our neighbours? 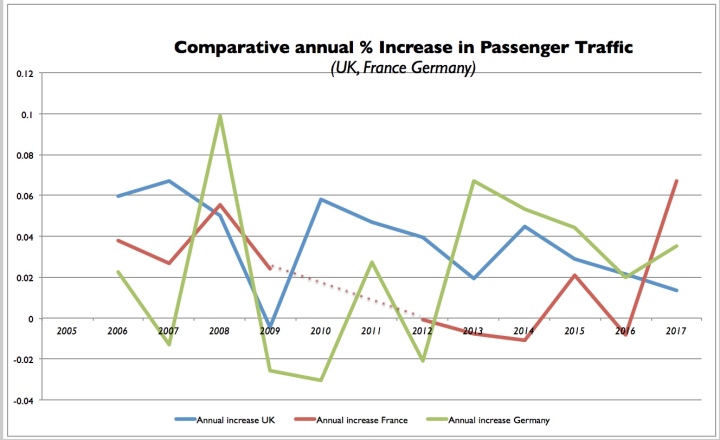 It is a complex picture in the UK, but it is clearly true that passenger numbers and certainly the distances travelled have increased significantly – which does perhaps underpin a lot of the reports and experiences of overcrowding on many services. There is though marked regional variations across Network Rail’s infrastructure, and the development of a strategy to improve transport in the North of England especially is clearly essential. Currently, the only movement in that direction in the past couple of years has been the Northern Powerhouse and Transport for the North – but in 2019, this connects across the M62 road corridor, and North East cities such as Leeds, York and Newcastle.   HS2 and HS3 are still essentially at the drawing board stage, and for rail passengers, the lack of progress there may be a reason for the fall off in passenger growth since 2014.

Yes, I know, statistics can be used to explain a variety of pros and cons in advancing the cause of rail transport and investment, but I had wondered for some time why, in an area I am familiar with, there seems to be more cars, lorries and vans on the road and industry and population has fallen.