During the 1950s and into the 1960s, the romance of travelling by rail was still supported by the naming of many express trains, not just in Britain, but also around the world, from the USA, to India and Australia.

In Britain, the naming of principal express trains was reinstated after the end of the Second World War, and in the 1950s and 1960s some were added, and some withdrawn. In and around 1961 the London Midland Region listed these:

What happened to them – and do these services still exist in some form I wonder?

(i) Started life as the “Thames Forth Express”, but when re-introduced in 1957, the name “Waverley” was deemed more appropriate.

(ii) Lasted only 4 years in BR days, but the service exists in a form today, under a private train operator: “East Midlands Trains”, operating on weekdays only.

Of the 24 named trains running in the 1950s and 1960s, 7 had been introduced by British Railways, whilst the two oldest – the Irish Mail and the Royal Scot eventually managed to clock up more than 75 years in operation. The shortest-lived service – the St Pancras to Nottingham Midland, the Robin Hood, still has the vestiges of the named train run in BR days, but only on weekdays. In addition it keeps the old HST / InterCity 125 sets in operation on the up run from London to Nottingham – some 45 years after their first introduction. The 7-car Class 222 multiple units operate the up service, whilst the 6-car sets with a pair of Class 43 HST power cars and Mark III coaches run in the down direction.

That said, on the London Midland Region of BR, this was definitely not the most well known, or popular express passenger service, and especially in the days of locomotive hauled trains, that honour went to the 10:00 from London Euston – known throughout its 70+ year working life as the “Royal Scot”. Although in later years, its northbound departure time was progressive put back, and by 1960, the train set off from Euston a 09:15, and scheduled to arrive in Glasgow at 16:15. Considering that 1960/61 was around the middle of the massive modernisation and re-equipment programme, a 7-hour timing was not bad – but, there were often delays.

This is what the timetable advertised:

In fact, the West Coast Main Line, from LNWR and LMS days until the middle British Railways era was home to a number of famous trains. Of course it ran on Sundays too, but with extra stops.

No fewer than 10 of these named trains were introduced in 1927, as the LMS was competing with its East Coast rival, the LNER, for the Anglo-Scottish passenger traffic. The “Royal Scot” service was introduced in that year, and it was hoped that the new locomotives from the North British Loco Co would arrive in time for the new timetable. In late 1927, the new engines were available to work the long distance Anglo‑Scottish expresses, in particular, the London ‑ Glasgow “Royal Scot” service, and the “Mid-Day Scot”. The Mid-Day Scot was so named due to the departure of the southbound and arrival of northbound being within 30 minutes of 1 pm. 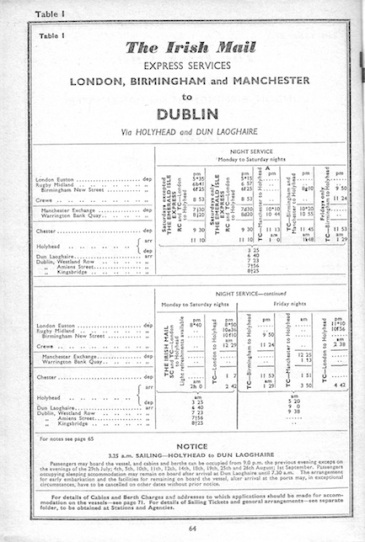 There were 6 named express services that provided links with the ports of Holyhead, Liverpool, Heysham and Stranraer for the cross Irish Sea ferry services. Of these, the “Irish Mail” was perhaps both the most well known, and the oldest named express passenger train. This was followed closely by the “Ulster Express”, which was originally launched as the Belfast Boat Train service by the Midland Railway, from St Pancras to Leeds, Lancaster, and on via Heysham. Before 1923 the LNWR operated a boat train service from Euston to Fleetwood, but following the amalgamations, the LMS moved its service to the more modern port facilities at Heysham, and from 1927 onwards it became the “Ulster Express”. The “Irish Mail” express operated out of Euston at 08:30, to reach Holyhead, where a connection was made with the LNWR steamer to Dublin, via Dun Laoghaire or Kingstown. A mid-day service from Euston at 13:20 connected with a Holyhead to Dublin (North Wall), whilst a dining car express from Euston left at 19:30 for Holyhead again, and connected with the LNWR’s steamer to Greenore. That was not the end of the story either, as the final service, the night “Irish Mail” left Euston at 20:45 for Holyhead, and connected with the ferry to Dublin via Kingstown, and was followed by another boat train service from Euston at 22:15, followed by a ferry to Dublin (North Wall).

So, the named expresses operated on the Irish Sea routes had a fairly long and varied history, with all still operational in BR days. It was added to in 1954, by the introduction of the “Emerald Isle Express”, also on the Euston to Holyhead route, which left Euston at 17:35, and allowed passengers to change to the cross-sea ferry at Holyhead well before midnight. 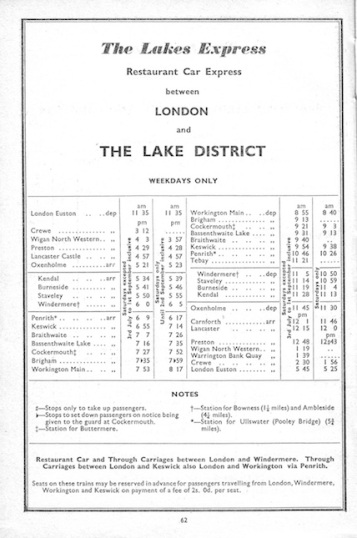 Interestingly at the peak of the years of the economic depression of the 1930s, the LMS introduced five new, named, express passenger trains. These were targeted at the passenger traffic to and from Manchester and Liverpool, alongside a more intriguing service from London Euston to Workington, by way of the old Cockermouth, Keswick and Penrith line – the “Lakes Express”. It was a curious mix of year round, and summer only daily workings. The year round service was from Euston to Windermere, whilst in summer, the extension to Penrith, Keswick and Workington was added. 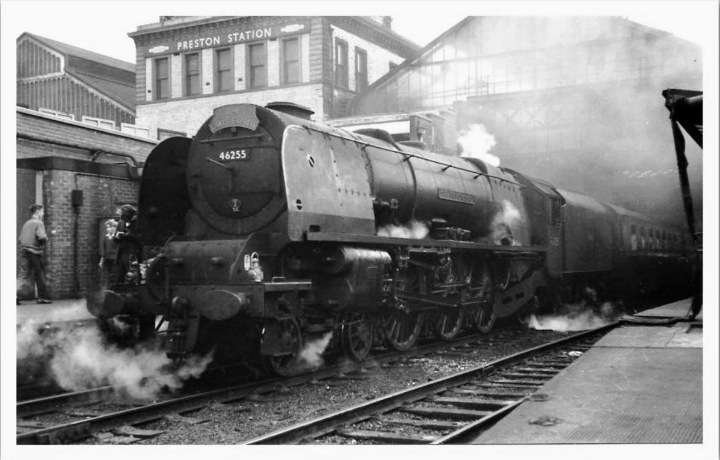 City of Hereford with a Lakes Express at Preston Station in 1963.     Photo Courtesy: Edwin Williams

The “Lakes Express” left Euston at 12 noon, and at Wigan a stop was made to allow a connection to Southport, and detach through coaches for Preston and Blackpool. At Lancaster, through coaches for Barrow-in-Furness and the Cumberland coast to Workington were detached. With a stop at Oxenholme, the final coaches for Penrith, Keswick and Workington were sent on their way, and the last portions of the “Lakes Express” reached Workington at 19:26. However, in the extract from the timetable shown, the arrival at Workington was 19:53 for weekdays, with an 11:35 departure from Euston – over ½ an hour longer than its official pre-war schedule. That said, like many others, timings on the West Coast Main Line were impacted and considerably slowed by electrification work at the time, although this ultimately led to much shorter journey times after the work was completed.

By the time the September 1964 to June 1965 timetable appeared, the only named trains listed on the London Midland Region were:

In the 1960s a new service carrying the name “The Night Limited”, left Euston at 21:50, for Glasgow, arriving at Central Station at 06:30, but carried first class passengers in sleeping berths only, and boasted a “Night Cap Bar” coach. This train was derived from the pre-war “Night Scot” service, which was a heavily used train, with 1st and 3rd class sleepers, but lost its name after WW2, and ran from Euston at 23:40. By the 1960s and the completion of electrification, the train was named again, and acquired its new departure time.

But by the mid 1960s, the 24 named express trains running in the late 1950s had shrunk to less than half, with just 11 express passenger workings retained from the original, but the overnight sleeper from London to Glasgow was formerly named. By the end of the decade, 14 named express services had gone, and 4 had been added.

British Railways in the 1970s was gradually becoming British Rail, with its corporate image, and double arrow logo. But the London Midland Region still offered 7 weekday named trains in the 1972/73 timetable. Although the number of workings was reduced still to 4 on a Saturday and Sunday, these did include the “Thames-Clyde Express” from St Pancras to Glasgow Central. The “Royal Scot” left Euston at 10:05, with a timed arrival in Glasgow at 16:42, and in the up direction, from Glasgow to London, the journey started at 09:25, arriving at Euston at 16:00. Just 8 years earlier, the same train was timed at 10:00 from Glasgow, with a 17:10 arrival at Euston – just 35 minutes longer. Quicker – yes – but only by just over half an hour.

The “Night Caledonian” is included in the 1970s list above, but was a short lived sleeper service between London and Glasgow, and was discontinued in 1977, whilst the older “Night Limited” continued until 1987.

In 1966, electrification had reached both Manchester and Liverpool, and two locomotive hauled express trains – “The Manchester Pullman” and “The Liverpool Pullman” were running from Euston. Manchester’s old London Road station had been rebuilt, remodelled and renamed Piccadilly, and the down Pullman was timed to reach Manchester in 2 hours 33 minutes, with an 07:55 departure from London. The equivalent service to Liverpool actually set off 5 minutes earlier at 07:50, arriving at Lime Street station by 10:24 – timed for 2 hours 34 minutes. At this time, with the exception of the “Thames-Clyde” express, the Anglo-Scottish services were electrically hauled to Crewe, and replaced by diesels – typically the English Electric Class 50 – for the rest of the journey north. Until of course, the electrification from Crewe to Glasgow was completed in 1974.

The all-pervading “Rail Blue” colours of the ‘British Rail’ era is sported by one of the last BR built AC electric locomotives – No. 86245 pauses at Lancaster on its way north to Glasgow in 1979.     Photo: Rodger Bradley

The very next year, 1975, saw the St Pancras to Edinburgh “Thames-Clyde” express disappear, whilst the “Irish Mail” lasted another decade or so, but it too went in the 1980s, together with the “Royal Highlander”, the Euston to Inverness sleeper service. A little ironically perhaps, Virgin Trains applied the name “The Irish Mail” to one of the HST/IC125 power cars it operated in 1998. The HST sets never operated on the West Coast Main Line, and not on the Holyhead bound service, so perhaps this was a reference to the similar service operated by the Great Western from Paddington to Fishguard.

During the British Rail era, named trains on the London Midland were still regular turns, albeit much fewer in number, but all were then run under the “Inter-City” brand, as the railway’s sectorisation strategy was implemented. Inter-City services made substantial profits for BR during those years and into the 1980s, with the “Royal Scot” and “Irish Mail” still in operation, alongside the “Royal Highlander”.

By 1988, another 5 named expresses had gone, including:

But by the end of the 1980s, they had all gone, as fixed formation train sets, and ultimately, the “Pendolino” trains took over the express passenger workings on the Anglo Scottish, West Coast Main Line.

40 years ago, an item in the October issue of ‘Railway Magazine’ lamented the loss of named services, with this introductory remark:

“SEVENTY-NINE in 1958; thirty-four in 1968; twenty-two in 1978: thus the thinning of the ranks of named British passenger trains continues.”

Of course, that covered all of BR’s five regions, and in this short piece it is just a reflection of what had happened on the London Midland Region, from it’s high of 24 formally named, down to just 6 in 1978. Only 4 of these remained in the 1980s, with the “Irish Mail” service that started in 1905 under the LNWR, coming to an end after 80 years, in 1985, at the same time, the relatively new “Manchester Pullman” also disappeared.

The final two named trains on British Railways’ London Midland Region – under the British Rail InterCity brand – were the daytime “Royal Scot” and “Royal Highlander” sleeper service, both of which started life in 1927 as an LMS service.

A Pendolino stopping at Oxenholme in 2013 on its way back to London. The station was used by the long since gone “Lakes Express”, to allow passengers to reach the South Lakes, before heading north to Penrith for the North Lakes.    Photo: Rodger Bradley

Such a shame that the names have all gone now, but then the appearance of the 21st century trains themselves – though fast and efficient – does not have the same appeal or glamour of the steam, diesel and early electric locomotive hauled services of previous years.

2 thoughts on “Where Have All The Named Trains Gone?”