In the same year that the company celebrates its centenary – yes I know it no longer exists! – it is 50 years since the final EE built diesel-electric locomotive was delivered to British Rail.  They were ordered in 1967 and delivered in the space of a year, between 1967 and 1968, and described in glowing terms by the contemporary railway press as:

“The 50 English Electric Type 4 locomotives of 2,700 hp now entering service with the London Midland Region of British Railways as the D400 class represent a significant step forward in traction engineering because they embody a number of features combined for the first time in one design.”

English Electric were the principal suppliers of diesel and major electric traction equipment in the post-war years into the 1950s, but their dominance was under threat from changes in the AEI Group companies, which included Metropolitan-Vickers.  But the 1960s proved a watershed in the UK rail industry, and for English Electric. 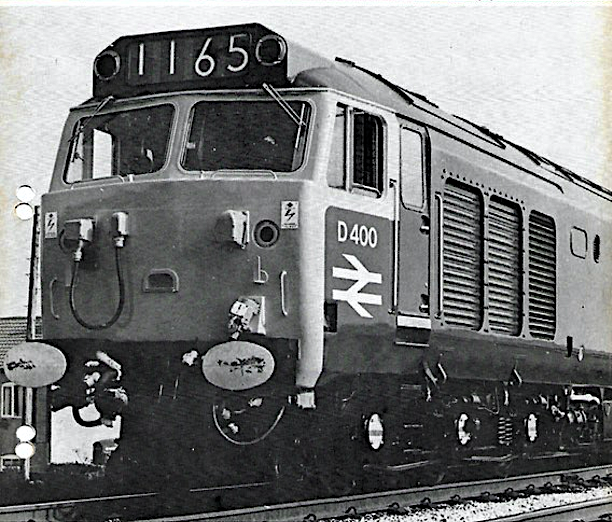 The new Class 50, or 2,700hp D400 series of locomotives were based on the DP2 prototype of 1962, which was used as a ‘testbed’ for English Electric’s new design of diesel engine; the 16CSVT.  The use of a ‘Deltic’ bodyshell as the locomotive was being built at EE’s Vulcan Works, was a bonus.  The 2,700hp was less than the existing 3,300hp ‘conventional’ Deltic, but DP2 was used on their workings and timing son the East Coast Main Line.  It proved to be better on acceleration, and included a number of innovative design features, such as automatic wheelslip and slide detection.  DP2 continued its workings on ‘Deltic’ timings until the 1967 accident at Thirsk, when it was severely damaged after running into a stationary cement train.  After this it was withdrawn from service, and engine parts were used as spares in what became the Class 50.

English Electric’s engine design and its technology was a great success, and in addition to the BR order, in 1968, English Electric signed a £2.7 million contract, for the construction and supply of locomotives for Portugal, and based around the same power unit.  These new BR locomotives provided considerable improvement in power to weight ratio, being demanded by the railway, and following the tender invitation from BTC/British Railways Board, the order for 50 locos similar to DP2 was placed.

English Electric had hoped to use their original ‘Deltic’ style nose, and cab, and even offered alternatives, including wraparound windscreens, but the BR design team’s preferred layout of two windows and flat front end was approved. 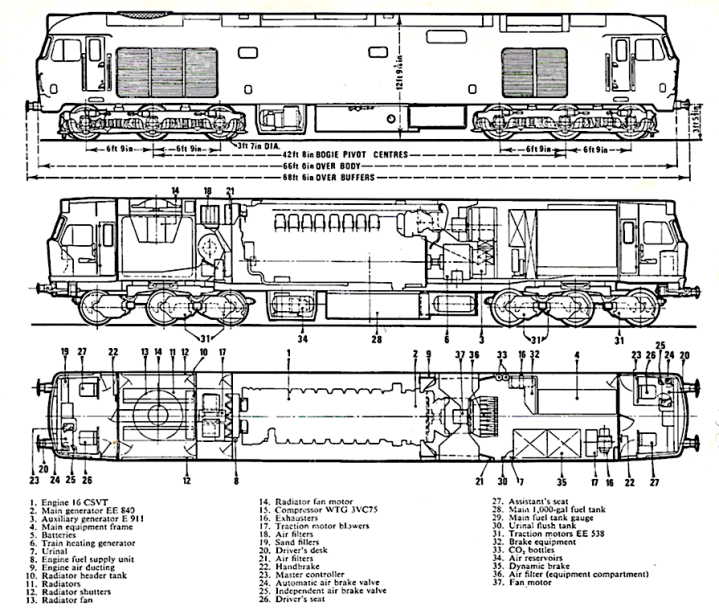 These locomotives – quite apart from the impressive diesel engine design – included some interesting new electronic technology, including:

Early diesel locomotives on BR benefited from developments in traction diesel engine technology, and these locomotives applied that to the maximum available at the time, from charge air cooling, to increase the volumes available for combustion, to turbocharging.  Even the radiator cooling fans were automatically controlled through electronic sensors, to match the needs of the engine when in use.

The new English Electric Type 4 was fitted with the 16CSVT engine, a ‘vee’ form16 cylinder design, with charge air cooling (intercooler) and turbocharged to deliver 2,700hp at 850 rpm. The engine had been extensively tested in the DP2 prototype, and was a forerunner of the 16RK3CT from Ruston Paxman, as used in the Class 56 locomotives of the late 1970s, early 1980s. A 12-cylinder variant was produced for the last ever diesel locomotives built in Doncaster Workshops – the Class 58.

Getting the power to the traction motors, which were the same type as those supplied for the still successful EE Type 3 (Class 37), came via the same generator used on DP2. The EE538/5A motors were arranged conventionally, as axle hung, nose-suspended, driving the wheels through reduction gearing.

Electric train heating was delivered by means of a separate generator, so gone were the steam heating boilers for the train!

The whole thing was built on a pair of rolled steel joists, linked together with fabricated cross members to form the main underframe assembly. Beneath this platform a pair of cast steel bogies, of the same basic design used on the Type 5 and some EE built Type 3 locomotives, were provided. English Steel Castings, supplied the bogie castings with a 13ft 6ins wheelbase, whilst the wheels were given a modified Heumann profile. This was developed to protect against derailment and ‘hunting’ of wheels and wheelsets in service. Naturally, roller bearing assemblies from Timken and SKF were the order of the day. 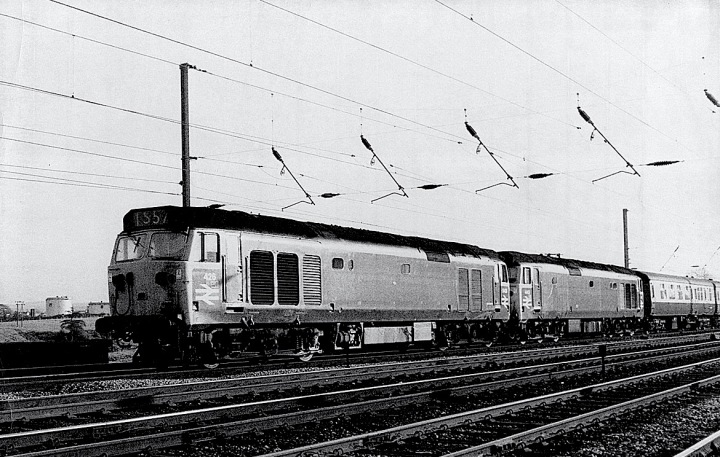 At the time these locomotives were introduced, BR still had its Design Panel, who had developed a standard interior layout. The Class 50 layout was based on this standard style, with heat and sound  insulation, and forced-air ventilation . One interesting aspect was a device that provided a delay when the engine was shut down and ‘parked’ at the end of its duty, which automatically switched off all the lights after 15 minutes – except tail lights.

The bodies were painted in the then standard rail blue, using a polyurethane paint, with full yellow ends, and bogies and running gear in black.  The paints used on locomotives has always come in for a great deal of interest – although mostly from the viewpoint of its colour.  But paint technology had moved on too in the 1960s, and the old oleo or synthetic resins of the 1950s, with coats of varnish overlaid had long since disappeared.

Interesting to reflect that many of the subcontractors listed above have disappeared from the rail industry in the UK, though some like Skefko (SKF) and Oleo Pneumatics still have a presence.

When these locomotives entered service, British Rail did not actually buy them immediately, and they were effectively rented through a company called “English Electric Leasing”.  Maybe this could be viewed as a forerunner of the many ROSCO’s that came into being in the 1990s.

They were used on the West Coast Main Line between Crewe, Preston, Carlisle and Glasgow, as a stopgap measure before full electrification in 1974. Initially working the main line expresses as single locomotives; they were responsible for a significant acceleration of timings north of Crewe after double heading was adopted from 1970. They worked the principal Anglo-Scottish services, including the “Royal Scot”, and on occasions were found as far north as Aberdeen.

Following the introduction of the “Electric Scots”, the fleet was transferred to the Western Region, whgere again they worked the principal Paddington to the West of England services, at least until the arrival of the IC125s (HSTs) took over these workings. They were also found on trains to Birmingham and the West Midlands, whilst during their time on the Western Region they began to acquire names.

Not long after British Rail bought the fleet of Class 50s – English Electric Type 5s – they began experiencing reliability problems, and a programme of refurbishment and modifications at Doncaster in the early 1980s brought improvements. They were re-delivered to the Western Region, and based at depots like Plymouth Laira and West London’s Old Oak Common.

Later in the 1980s, they acquired a ‘sector’ colour scheme, with the garish “Network Southeast” livery applied a to a number, whilst true to GWR and Western Region form, one was painted in a green livery.

The Class 50 continued to work on West of England trains, some engineering and work trains too, whilst 50049 was modified still further in an attempt to use the type on freight services. It was not a success. At the start of the 1990s, the class was becoming troublesome again, and on some services were replaced by Class 47 and multiple unit trains.

Perhaps as a result of the pedigree of the original builders, and the affection they had acquired from the professional as well as the enthusiast community, a number of locomotives have been preserved, and remain in use on specials today. The lion’s share of ‘preserved’ Class 50s are on the Severn Valley Railway, with 5 of the 6 locomotives owned and operated by Alliance Rail, and the other by Paul Spracklen. In the north, the East Lancs Railway has D408, whilst Peak Rail is the home of D429 and D430, currently under restoration by the “Renown Repulse Restoration Group”.

The West Midlands is home to another collection of 3 locomotives, including the first of the class, D400, and based at Washwood Heath, and all are approved for mainline operations.
Considering that this English Electric design was the last of its type, and the last wholly UK built locomotive, the preservation and railtour operators have delivered some remarkable working exhibits. It seems the English Electric heritage from Preston and Newton-le-Willows is continuing well into the 21st century, in the company’s centenary year, and this locomotive is fitting legacy for one of Britain’s greatest engineering companies.