There is a lot of waffle in the 21st century surrounding the measurement of train performance and punctuality.   This is what the public see today:

“Public Performance Measure” (PPM) – defined as the percentage of  trains arriving at their terminating station within five minutes for commuter services and within 10 minutes for long distance services.”

However, ‘on time’ means within five minutes of the scheduled destination arrival time for regional operators, or within ten minutes for long-distance operators”

So, in 2017, with this definition of ‘on time’ it actually means being LATE!

Amongst other ‘odd’ definitions accepted in current performance and punctuality measures is the idea of trains being cancelled whilst still on route.  This is the CaSL definition, perhaps better described as train service failures, and covers:

There is a difference between ‘punctuality’ and ‘performance’, where the latter could include intermediate station to station times, or train capacity/loading, on a particular route.  However, today, the performance is described as a combination of punctuality and reliability, but the raft of statistical data available from UK Government sources does not give simple clarity, and it’s not easy to compare with what had been the case in the 1980s say.

In overall terms, train performance and punctuality between 1978 and 1982 on main line/long distance services was definitely not great, but at least the less meaningful phrases such as MAA (Moving Annual Average), or CaSL (Cancellation and Significant Lateness) are not there:

British Rail was divided into 6 regions until 1982 when the division into business sectors began – InterCity, NetworkSouthEast and Regional Railways for passenger operations, followed later by a similar exercise with freight services.  The principal objective being to try and introduce the then fashionable business management practices into operating and managing the railway. 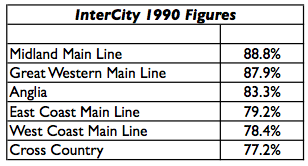 It didn’t improve punctuality directly, but was targeted at reducing the central government support, and ultimately paved the way to privatisation.  Ironically though, by 1987 to 1990, operations of trains on the nationalised railway was making a profit.

Today, we have access to these pieces of information about train performance:

The closest we get from the simple available and published details is a chart showing the measure of trains arriving within 1 minute of their booked time – the green line is that measurement in this chart:

It does appear that between 2002 and 2010 that measure of within a minute of Right Time (RT MAA in the graph above), was steadily improving, but since 2011 it has continued to decline.  Why is that?