This month TfL has announced the 4 pre-qualified bidders to design and build the new trains for the DLR including Alstom, CAF, Bombardier and a Siemens consortium, with the contract due to be placed in autumn 2018, and delivery in 2022.  5 Years to deliver 43 ‘walk-through’ trains, replacing the existing stock, and including features such as on-board real-time information, air-conditioning and mobile device charging points. 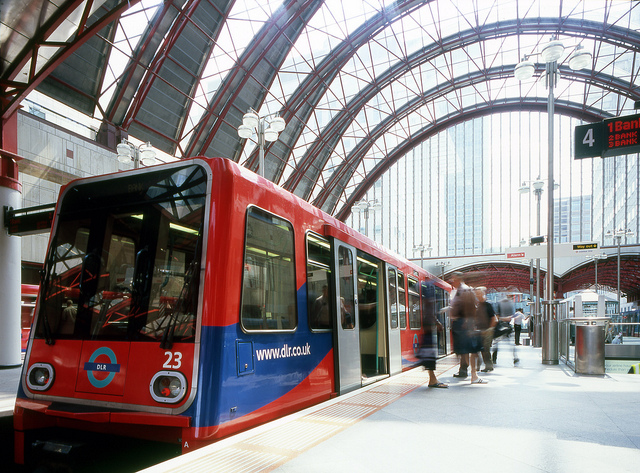 It is worth remembering that 2017 also marked the 30th anniversary of the opening of the DLR by HM The Queen on 30th July 1987, and in the same year, GEC-Mowlem were awarded a £50 million contract to extend the line, even before it was opened.  All of this was in response to the huge level of investment in reshaping London’s Docklands – a process that continues to this day.

GEC-Mowlem were tasked with designing, building, and handing over to the DLR, a fully operational railway, and within a cash limit of £60 million, following placement of the order in 1984.

This was achieved in 3 years, so why does it now take 5 years to provide new rolling stock?

Whilst the DLR was an entirely new construction, extensive use was made of former British Rail lines, since the railway was to be built to standard gauge, with the old London & Blackwall Railway followed for some of its route  in phase one.  The Beckton extension was planned in to support what is now the London City Airport. 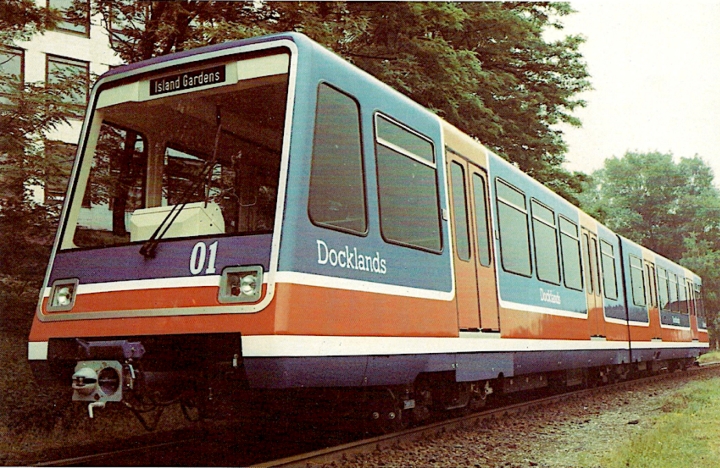 The original DLR colours seen on this view taken in 1987

Trains for the initial railway were twin-car articulated units, with bodies supplied by Linke-Hoffman-Busch, and powered by GEC Traction. The Germans won the order on their strength, and reputation in the rapid transit market, since in the UK there was little experience at that time.

The vehicles collected power at 750V d.c. from a bottom contact, steel faced conductor rail, insulated from accidental contact on the top and two sides. The innovative contact systems were supplied by Brecknell-Willis, and described by the Railway Industry Association in April 1987:

“On two new urban transit systems, more than 10,000km apart, a modern development of one of the oldest electric traction technologies is enhancing the performance of dc electrification. Both the Singapore Mass Transit Railway and the Docklands Light Railway in East London are being equipped with Brecknell, Willis aluminium/steel composite conductor rails to supply direct current power to trains.“ 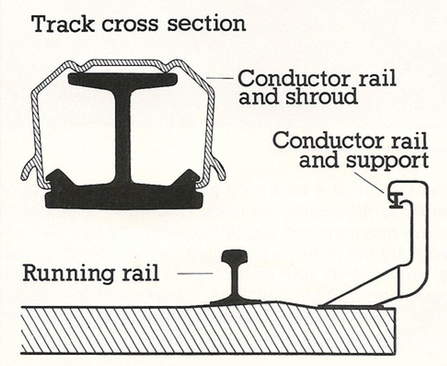 The conductor rail, of aluminium, is steel faced, to reduce wear from the under- running contact shoe, and the contact systems were supplied by Brecknell Willis.

Other UK companies involved in this automated railway were Brush Electrical Engineering, who were brought in to provide power equipments on the extension project.  GEC Transmission & Distribution Projects and GEC Telecommunications were all heavily involved in this work.

The new light railway was designed to operate automatically from day one, but were provided with the essential – at that time – control panels for use on the vehicle in an emergency.  The ATP and ATO control systems in the original railway were independent of each other, controlling and operating the railway from the the Operation and Maintenance Centre.  Information is fed to the train’s on-board computers by means of Data Docking Links (DDL) at each station, and update the train computers. The ATP system ensures trains observe speed limits and prevents unsafe train movements, with operating speeds regulated by the rate at which transponders are crossed on the trackbed.

This was of course later expanded, and now looks like this:

The DLR was not the first of GEC’s major light rail projects in the UK, but, like the Manchester Metrolink, was one of the UK’s earliest, and ranks alongside Birmingham’s ill-fated Maglev as one of the most innovative.