In 1962, the British Transport Commission (Railway Executive), implemented a workshop rationalisation.  The idea being to eliminate duplication, over capacity, and create a more efficient national operation.

This was overshadowed by the “Beeching Plan”, implemented by the Government from 1963 onwards.  But, Dr Beeching was not the principal ‘bad guy’ – the real culprit was Ernest Marples, the Transport Minister.

At that time, rationalisation of workshops was a practical, and likely cost effective move.  However, Marples prevented the re-organised workshops from competing for engineering work beyond British Railways.  Had this been allowed, it might not have saved all of the engineering jobs, but might have been a life saver for many of the workforce, and their skills. 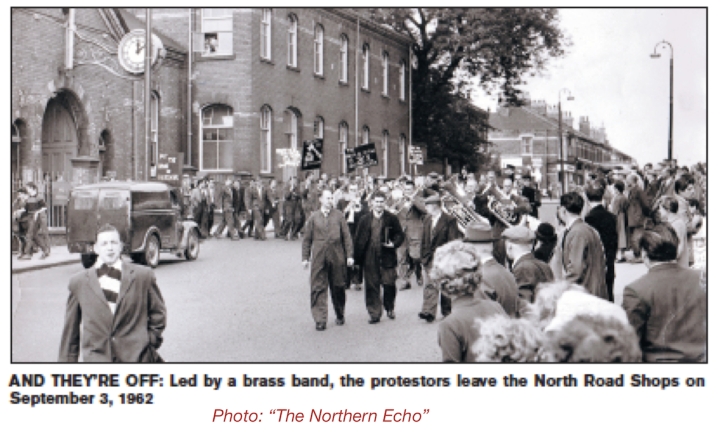 Just 50 years ago this year – most people recall that England won the football world cup – but at the same time, the historic locomotiove works at Darlington was closed, making more than 2,000 skilled people redundant.  The birthplace of railways had been dealt a dramatic and fatal injury by the action and inaction of the Government of the day.

This dramatic decline in the fortunes of railway employment in the area resulted – not surprisingly in some interesting exchanges in parliament.  A local MP received this response when asked what support was being made available to the men declared redundant:

“A special office of the Darlington Employment Exchange was set up at the North Road Workshops in October, 1965, and almost all the workshop employees registered for other jobs. Terminations have so far exceeded the number of planned discharges. It is estimated that about 250 people have 47W been placed, about 100 have found work and 40 have been transferred to other railway employment. Prospects of alternative jobs for the remaining employees are generally good; these include opportunities at the Railway Workshops, Doncaster for men willing to transfer.”

The MP making the response for the Ministry of Labour on 25th January 1966, was the MP for Farnworth – Ernest Thornton.

Late in the previous year, Ted Fletcher, the MP for Darlington made a significant speech in a parliamentary debate held specifically about the closure of Darlington Works.  A key point he made a number of times was about the adaptability and capability of the skills that the men had shown over many years. In the British Railways era they had also demonstrated the ability to build, repair and maintain diesel locomotives.

However, it seems that the railway management had a strategy and an agenda that they were sticking to, despite some clear examples that they might be travelling in a less sensible direction.  Take this particular observation that Ted Fletcher made in his speech on 4th November 1965, just a few weeks after the closure announcement by British Railways:

“I give an illustration of what has happened in one department of the works, the spring shop. In June, 1964, the management notified the unions that the spring shop was to close and that springs of locomotives being repaired at Darlington would have to be manufactured at another centre. The shop was closed and the machinery and equipment were put up for sale. Serious delays immediately commenced. Other sources of supply failed the management and eventually they had to reopen the spring shop. Meanwhile, the skilled men had got other jobs and the shop had to be carried on 1365 on a part-time basis. In a very short period orders for springs poured in from other railway centres and the spring shop had to be reopened for normal work.”

That doesn’t sound like a particularly practical way of managing a significant change within the works, let alone across the whole industry.

Inevitably, as in all other examples when major changes and where work is planned to cease in any business, the people needed to make the changes successful leave, and that approach still holds true over 50 years later.  There was no long term plan, no structure or development, save for the introduction of competition and allowing ‘market forces’ to dictate the industry’s future.

In the works, perhaps the 2,000 employees does not seem like a very large number, but then there was the impact on the works’ supply chain, local shops, communities, education and schooling, training, loss of apprenticeships and skills development.  Did the railway workshops’ reorganisation really save money?