Just before WW2, an intriguing little book was published, entitled “Nationalisation of Transport”.  Its subtitle being “An Impartial Review” – and there the fun starts. 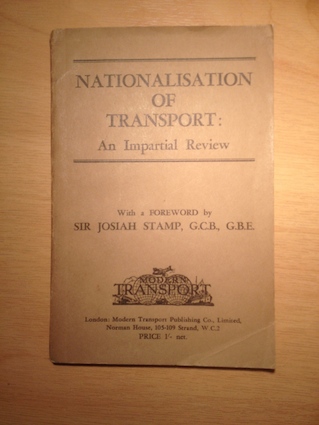 The foreword is by no less a person that Sir Josiah Stamp, GCB, GBE – President of the LMSR – obviously impartial, as head of the country’s largest private railway company.

It is an interesting little book, and couched in the language and culture of its day, but provides some fascinating insights into the thinking, both from a commercial/business, and pseudo political perspective.  On the latter point, the earliest references to nationalisation are hailed as coming from Gladstone, back in 1844, whilst in 1918, Winston Churchill is cited as a supporter.

“…railways in private hands must be used for immediate direct profit but it might pay the state to run railways at a loss to develop industries and agriculture”.

Back to Gladstone’s original proposal – well it wasn’t really his anyway – but in 1844, the report before a Select Committee by William Galt – taken up by Gladstone’s Act of 1844 gave the Government the option to ‘acquire’ the railway 21 years after its inception.  This option was reinforced through Royal Commission and Act under Sir Rowland Hill around 1867.

Ironically, it is the option to ‘acquire’ ownership after the 21st Century Train Operating Comnpany’s leases expire that could be a simple precedent for Jeremy Corbyn, and the Labour Party to implement a similar approach.

Into the 20th Century, and of course the railways came under state control between 1914 and 1918, and perhaps after the end of the war, Churchill had foreseen the depression years of the 1920s and 1930s.  However, although proposals had been made through the Trades Union movement, and Royal Commissions appointed, reaching no conclusions, the publication of this little ‘impartial review’ was simply an exercise in reinforcing the view of the private train companies.

Having gone through sections headed:

The conclusions reached suggest that:

“…the system of transport in this country offers scope for further improvement, but this does not imply that nationalisation would remove the difficulties.”

“As to the claim that transport would be more efficient under state ownership, we come to the conclusion that existing transport facilities are in fact efficient, and we can find no case for nationalisation on the evidence available.”

Impartial study – no.  Naive? – probably.  Lack of a strategic vision – definitely.  Classic short term thinking, and no sign of either Mr Marples or Dr Beeching in sight!

Of course, it needs to be remembered that the ‘Big Four’ operated, road, sea and even air services, as well as rail.  Not so surprising that they took this view really.

The text was written in 1938, and of course in 1939, at the start of World War Two, things were changed dramatically, and the railways were once more under Government control.

The subject of nationalisation was left in the ‘long grass’ until after World War Two.

Improvements and efficiencies were made over a 20 year period perhaps, and even cost savings, but the wheel has turned full circle, and it is presumed that private operators are once again the only mechanism for achieving success in transport.